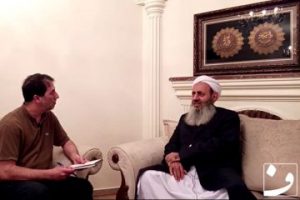 Criticizing the state pressures on the Iranian Sunni community, the most influential Iranian Sunni leader urged on removing such pressures. He was talking to Ensaf News website in a video interview published on Feb. 27, 2022.

Here are the main points of Mawlana Abdol-Hamid in his talk with the news website:

I have supported the Taliban since I had enough information about them. I live in their neighborhoods.

The Taliban resisted against NATO and US invaders and expelled them from Afghanistan.
They released their country and now determine their own destiny.

Afghanistan has never seen such peace in its history. All provinces of Afghanistan are run by local people of different ethnicities and sects. I hope the Taliban will respect women’s rights and will not deprive them of the right of education.

If the Taliban are weak in some cases, their weaknesses can be corrected.

I do not have direct contact with the Taliban, but I express their weaknesses through speeches.

Iranian Sunnis’ demands
As Sunnis, we love our country and defend our national interests. In the elections, we pursue our interests and demand our due rights. Our legal demands should be met.

The appointment of our capable people and the religious freedom are among our most important demands. 43 years after the revolution, Iranian Sunnis have not yet got their due rights.
Some fanatics have been depriving the Sunnis of their rights.

Six months have passed since the Raisi’s administration has taken power; he has not yet kept his promises.

The Sunnis do not want others to decide about their religious affairs. The government has the right to monitor, not to interfere.

I have sent a letter to president Raisi and complained. His advisor to the Sunnis’ affairs told us that capable Sunnis would be engaged in high posts. Before this, the election campaign team of Mr. Raisi also promised the same, but we have been waiting for six months with no result.

Iran-Saudi Arabia relations
I have not been appointed a mediator to resolve disputes between Iran and Saudi Arabia. I believe that solving Muslim’s differences is an Islamic and a rational duty. Division among Muslims is in the favor of the United States and Israel.

I believe that the Yemen crisis should be resolved; Yemenis must form an inclusive government that maintains the interests of neighboring countries.

The Grand Maki Mosque
The Grand Makki mosque of Zahedan has no relationship with Saudi Arabia and Pakistan.
We are independent and do not receive any financial help from any country.

We had never complained about Iran outside; we have tried to resolve our differences in the country.

Security and justice
If justice is implemented, security is established.
Sunnis should be engaged in official and key posts of the country and justice must be implemented.