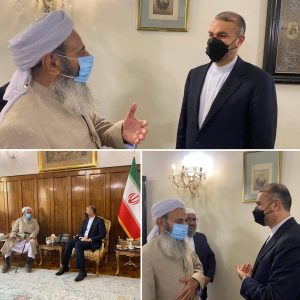 The most influential Iranian Sunni leader met with the Iranian foreign minister, Hussein Amir Abdullahian in Tehran on Wednesday, February 16, 2022 discussing some important national issues with the minister and his assistants.

The meeting was held in the Ministry of Foreign Affairs’ building.

The issue of water right of Iran which comes from Afghanistan, engagement of Iranian Sunnis in the foreign ministry, Iranian fishermen jailed in abroad and the issue of Vienna nuclear talks were discussed in the meeting.

Shaikh Abdol-Hamid raised the issue of Iranian Baloch fishermen captured mainly in Somalia, Mozambique, Tanzania and Sri Lanka. Abdullahian promised to do his best for the release of his countrymen regardless to their sect and race.

The president of Darululoom Zahedan, the biggest Iranian endowment religious center, alluded to the ongoing nuclear talks in Vienna and expressed his hope that the Iranian negotiating team in Vienna would ensure the interests of the Iranian nation, and the problems of the people of Iran would be resolved.

The Friday prayer leader of Sunnis in Zahedan emphasized the need for the right of water from Afghanistan through the Hirmand River. He urged on pursuing this issue through diplomacy and popular ways.

The Iranian foreign minister announced Iran’s support for Iranian captives in other countries.

He announced the determination and resolve of country’s foreign policy system in protecting the rights of Iranian people in Vienna talks.