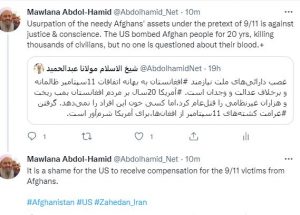 The prominent Iranian Sunni scholar and social leader called use of the frozen fund of Afghanistan for the 9/11 victims ‘shameful’ and ‘unjust’.

In a statement published on his Twitter account, Mawlana Abdol-Hamid said: “Usurpation of the needy Afghan nation’s assets under the pretext of 9/11 is against justice and conscience.”

He alluded to the fatal bombardment of the US forces in Afghanistan and murder of innocent civilians and wrote: “The United States bombed Afghan people for 20 years, killing thousands of civilians, but no one is questioned about their blood.”

“It is a shame for the United States to receive compensation for the 9/11 victims from Afghans,” the president of Darululoom Zahedan concluded.
Washington froze the money after the Taliban took power last year.