‘Love of Allah Makes Practice of the Sharia Easy’ 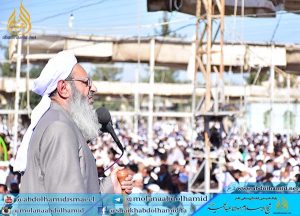 Insisting on the importance of practicing the commands of the Shari’ah in daily life, the Friday prayer leader of Sunnis in Zahedan considered the love of Allah and His Prophet Muhammad, peace and blessings of Allah be upon him, necessary, believing that obedience is not possible without love, motivation and courage.

Talking to the Friday worshipers of Zahedan, capital of Iranian Balochistan, on January 21, 2022, the most influential Iranian Sunni leader inspired Muslims on obeying Allah with love and courage, saying: “The love of Almighty Allah and His Messenger is the faith and is in accordance with the Qur’an and wisdom. The Holy Prophet said: ‘None of you truly can be a believer until I am more beloved to him than his child, his father, and all the people’. Indeed, love with Allah makes the practice of the Sharia easy. Prayers, fasting, Hajj, Zakat, and other parts of worships will be easy when we love Almighty Allah and His messenger.”

“It was motivation and love that made the companions emigrate, fight in the way of Allah, leave their homeland, and obey the Messenger of Allah in the most difficult circumstances”, said the president of Darululoom Zahedan.

Shaikh Abdol-Hamid continued his speech by saying: “The companions, who were full of love and affection, accompanied the Prophet Muhammad, peace be upon him, when they saw him, they believed in him and realized that he was the true Messenger of Allah. Today, as Muslims, although we have not seen the Prophet, but we believe in the Qur’an that was revealed to him, we act on his hadiths and sayings. We recognize by reason that obedience to the Prophet and perseverance in his teachings will lead us to lasting success.”

“As human beings, we must think of God’s blessings and believe in the greatness of Him by seeing his wonders and creatures. We must think of the benevolence, services, and compassion of the Prophet PBUH and love his family members and Companions, and imitate them sincerely,” said the eminent Sunni scholar of Iran.

Shaikhul-Islam Mawlana Abdol-Hamid concluded his points by saying: “Love of Almighty Allah and His messenger is the greatest wealth and blessing that makes the practice of the Shari’ah easy for believers. Based on this love, we should always remember Allah and send salutations to the Holy Prophet, peace be upon him”.

‘The material things of the world are our essential needs. We should not love them in such ways that forget Allah, he added.

Boosting relations with different countries is necessary
Referring to Iran’s recent consultations and negotiations with neighboring and some developed countries of the world, which aim to strengthen diplomatic relations to resolve economic problems, the most influential Iranian Sunni leader called such measures important for the advancement of Iran.

Shaikh Abdol-Hamid said: “It is an honor that Iran is establishing good diplomatic relations with the world; this will help us to have a strong economy and significant progress in the development of the country.”

In interacting and compromising with countries, the Friday prayer leader of Sunnis in Zahedan called on the Iranian officials to be patient and tolerant, and in governing the country to please Allah and the people.

“As an Iranian citizen, I remind the officials that the best way to achieve this goal is to please God and the people. Gaining the pleasure of Allah is the highest insight and the sign of the broadest vision. If we have God in our side, He will support us. All of the nations and countries, politicians, elders and leaders need God’s support,” president of Darululoom Zahedan noted.

The eminent Sunni scholar of Sistan-Balochistan continued his Friday speech of Zahedan by addressing the officials: “Satisfying people, hearing their voices and addressing their demands is vital. Any political system that satisfies God and its nation will remain safe and stable.”

Emphasizing the need for justice, Shaikh Abdol-Hamid further said: “It will be difficult to satisfy God and the nation without justice and equality. The spread of justice is very vital and important; the Almighty Allah likes justice. It is a fact that it is oppression that tears states and governments apart, not infidelity as it was chanted in the early years after the 1979 revolution.”

“The justice of the Holy Prophet and the Caliph Umar and Ali must be implemented in Iran. I hope that the authorities will work to implement justice and to gain the consent of Allah and the people,” he added more.

De-escalation is the best policy
The most outstanding Iranian Sunni leader considered de-escalation and lifting of sanctions as effective steps in the country’s progress and said: “Struggle to lift sanctions, de-escalating tensions and establishing good relations with other countries is the best policy. Solving people’s problems, creating jobs, and tackling poverty are among the main public demands.”

“As the President Raisi promised and chanted that he eradicates poverty and creates jobs, I hope that these promises will be fulfilled sooner so that the people can get rid of the problems and those who fled the country will return.”

“The fundamentalist politicians, who mostly chant the slogan of fundamentalism, should pay more attention to the demands of ethnic and religious communities. There should be no difference among ethnicities and religious sects; all Iranians should have equal rights. All Iranians should have equal rights and opportunities,” said Imam of the Grand Makki Mosque of Zahedan.

In his last points, the Friday Khateeb of Zahedan said: “The Iranian people expect the authorities to engage the capable people of different backgrounds in government jobs regardless of their religion, sect, or ethnicity. It requires the foresight and equal view of the officials.”