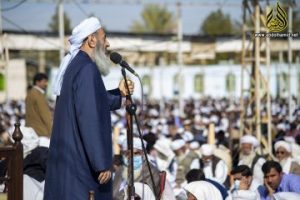 Explaining ethics as one of the most important bases of Islam, the most eminent Iranian Sunni scholar called on the Muslim leaders and all followers of the Prophet Muhammad to be equipped with sincerity and honesty and to convey the message of Islam to the people of the world with good morals.

He was talking to tens of thousands of people in the biggest Friday gathering of Zahedan on January 14, 2022.

While reciting verses 37-40 of the chapter Ghafir, Shaikh Abdol-Hamid described immoralities as the biggest challenge of today’s society and said: “Today, Muslims are so weak in practicing the Prophet’s characteristic in life. They are Muslims by name and are far from teachings of the Shari’ah of Islam. While at the time of the Prophet PBUH, Muslims were real Muslims. When people of the world saw their behavior and treat with others, they were surprised and amazed and converted to Islam.”

“The prophet Muhammad and his companions did not conquer the world by the force of sword, but through morality, patience and tolerance. Their firm tenets, right action and good behavior, their broad vision and high capacity inclined non-Muslims to accept Islam’, said the president of Darululoom Zahedan.

The Friday Khateeb of Sunnis in Zahedan continued his speech by saying: “The Prophet Muhammad was the best role model for all the worlds in ethics and in high capacity. Anas, may Allah be pleased with him, says: I spent ten years in the service of the Holy Prophet, and he never rebuked me for my mistakes”.

“The Prophet listened to weak people, to slaves, old women and all human beings. Sometimes someone would take the Prophet by the hand and talk to him in a corner and he would listen to him. The Prophet used to listen to the hypocrites, and tolerate their annoyance. The hypocrites mocked at the Holy Prophet and said: He is an ear; he listens to everyone. In response to the hypocrites, Almighty Allah revealed the verse and said that the Prophet is a good listener,” he added more.

The prominent Sunnis scholar of Balochistan went on to advise the Muslim rulers to practice the prophetic behavior in dealing with others, saying: “Rulers must listen to the people, tolerate them, and solve their problems with patience; this is the sign of tolerance and perseverance. The Muslim leaders who consider themselves as representatives of Islam and other Muslims, must practice Islamic and prophetic behavior”.

Scholars should plan for educating and reforming the young generation
In his final words of the first part of his Friday speech of Zahedan, President of Darululoom Zahedan insisted that scholars should launch and arrange reform programs for the young people and said: “I’d like to call on Ulama to have special programs in educating and reforming the young people, who are the assets and future makers of our society.”

In the second part of his speech, Shaikh-ul-Islam Mawlana Abdol-Hamid alluded to the economic and living problems in Iran, in the last part of his Friday speech, saying: “Unfortunately, the economic situation of the country is critical today. Elites and scientists are fleeing the country because of economic and living problems. People suffer from hunger, poverty, and low income.”

The most outstanding Sunni scholar of Iran said: “Human capital is the biggest asset of any country. The brain drain, especially the escape of experienced people, scientists, specialists and experts who have been supported by the national capital in order to serve the country, causes irreparable damage to the country.”

“Due to the critical situation in the country, the elites are largely fleeing abroad. To improve the economy of the country and change the current situation, officials should take decisive measures,” the Friday prayer leader of Sunnis in Zahedan further said.

He added: “I asked an expert why scientists are fleeing abroad, he replied: the employee salary is not enough to make a living because the value of money has fallen compared to the past”.

“How can the elites and the talented people stay in the country with this situation?” Shaikh Abdol-Hamid asked.

President of Darululoom Zahedan continued his Friday speech of Zahedan by saying: “People from different classes, workers, teachers, retirees, judges, etc. are protesting against economic problems these days. They do not protest because the enemy evokes them but the fact is that the society and the nation are under severe economic pressure.”

“Economic problems are among the national problems and the public demands. The authorities must take urgent measures to solve these problems,” Mawlana Abdol-Hamid emphasized.

The president Raisi’s administration should fulfill its economic promises
Expressing his regret over the devaluation of the Iranian currency, the eminent Sunni scholar of Iran said: “The value of Iran’s national currency has fallen more than many poor countries. The national currency is our credit that must be valued”.

In his last points of this part of his Friday speech of Zahedan, Shaikh Abdol-Hamid said: “The president Raisi’s administration must keep its economic promises that he made to the people and restore the value of the national currency to make the country prosperous again; this is a public demand.”