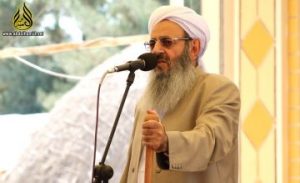 Expressing his concerns over human capital flight from Iran, the most influential Iranian Sunni leader called on the authorities to find urgent and new solutions to the country’s economic and living problems.

Addressing the Friday worshipers in Zahedan’s Grand Musalla on January 14, 2022, Shaikh-ul-Islam Mawlana Abdol-Hamid alluded to the economic and living problems in Iran, in the last part of his Friday speech, saying: “Unfortunately, the economic situation of the country is critical today. Elites and scientists are fleeing the country because of economic and living problems. People suffer from hunger, poverty, and low income.”

The most outstanding Sunni scholar of Iran said: “Human capital is the biggest asset of any country. The brain drain, especially the escape of experienced people, scientists, specialists and experts who have been supported by the national capital in order to serve the country, causes irreparable damage to the country.”

“Due to the critical situation in the country, the elites are largely fleeing abroad. To improve the economy of the country and change the current situation, officials should take decisive measures,” the Friday prayer leader of Sunnis in Zahedan further said.

He added: “I asked an expert why scientists are fleeing abroad, he replied: the employee salary is not enough to make a living because the value of money has fallen compared to the past”.

“How can the elites and the talented people stay in the country with this situation?” Shaikh Abdol-Hamid asked.

President of Darululoom Zahedan continued his Friday speech of Zahedan by saying: “People from different classes, workers, teachers, retirees, judges, etc. are protesting against economic problems these days. They do not protest because the enemy evokes them but the fact is that the society and the nation are under severe economic pressure.”

“Economic problems are among the national problems and the public demands. The authorities must take urgent measures to solve these problems,” Mawlana Abdol-Hamid emphasized.

The president Raisi’s administration should fulfill its economic promises
Expressing his regret over the devaluation of the Iranian currency, the eminent Sunni scholar of Iran said: “The value of Iran’s national currency has fallen more than many poor countries. The national currency is our credit that must be valued”.

In his last points of this part of his Friday speech of Zahedan, Shaikh Abdol-Hamid said: “The president Raisi’s administration must keep its economic promises that he made to the people and restore the value of the national currency to make the country prosperous again; this is a public demand.”