Shaikh Abdol-Hamid in the Friday speech of Zahedan: 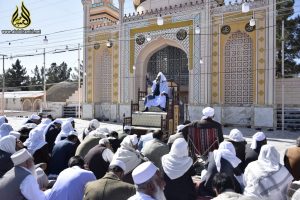 Pointing out to the importance of respecting human rights in Islam, the eminent Sunni scholar of Iran considered the violation of human rights dangerous in this world and in the hereafter in his Friday speech of Zahedan on December 3, 2021.

“Before the dispatch of the Holy Prophet Muhammad, peace be upon him, and before the revelation of the Holy Qur’an, people lived in ignorance and in a blind darkness. At that time, people did not recognize the right from the false and the good from the bad; they followed the desire of the soul and the devil, and were in the worst condition. In such circumstances, God sent the best book and the best guide and mentor to the people of the world. In fact, Almighty Allah guided people to the straight path through His best messenger to save them from the hell,” Shaikh Abdol-Hamid Addressed the Friday worshipers in Zahedan’s Grand Musalla.

“The Qur’an is the last divine, complete, and comprehensive book that answers all questions and needs of human beings in every age. Allah has explained His oneness and greatness in the Holy Quran and has described His blessings on humanity,” said the Friday prayer leader of Zahedan.

He continued: “Today, Muslims have the best and most comprehensive divine book and the prophetic character, which if they imitate, they will be successful. Alas, instead of pursuing the right path, human beings follow the path of Satan. The pursuit of the devil and the evil strike both worlds.”

Give everyone his\her right completely and avoid oppression and injustice
The most influential Iranian Sunni leader explained the rights of others important and said: “Unfortunately, oppression and violation of others’ rights have increased today. People have been involved in practicing the actions of the people of the pre-Islamic era. Many people take their rights perfectly, but deprive others of their rights. Many children want their rights fulfilled, but they do not fulfill their parents’ rights. Some parents complain that their children do not respect them. Children complain that their parents do not respect their rights. Many couples do not respect each other’s rights, some expect good from their neighbors and relatives while they themselves do not respect the rights of their neighbors and relatives.”

“Some people are involved in backbiting, slander, lie and so on and do not pay loans and wages of workers. Sometimes we consider a sin small while that sin is very big and dangerous before God. On the Day of Judgment, Almighty Allah takes the rights of others justly and fairly; He will ask for all small and big things,” he added more.

Killing an innocent person is like killing all human beings
The most outstanding Iranian Sunni leader expressed his concern over the increase of murders in the society, and said: “Unfortunately, the murder of innocents has increased in the society today.”

“After polytheism, the biggest sin is killing of innocent people. The Qur’an says: Whoever kills a person unjustly, it is as if he\she has killed all human beings, and whoever saves a person, it is as if he\she has saved all human beings. Only the noble Qur’an mentioned this idea and there is no such a theory like this in any other community or religion,” Shaikh Abdol-Hamid said while talking to the people of Zahedan.

“It will be a good step if the UN office writes the verse 32 of Surah Al-Maida on its gate. Unfortunately, the United Nations and the UN Security Council are far from the main goal of their establishment, which was to address the demands of all nations and oppressed people around the globe. Some powerful countries do not allow the UN and the Security Council to change their approach and act according to the needs of the present edge,” said the Iranian Sunnis’ leader.

He added more: ‘Tribal killings are among blind and worst killings. Such murders have dangerous consequences and are great losses for society’.

‘What will be the answer of those who commit such crimes before God on the Day of Judgment?’ Mawlana Abdol-Hamid asked.

“The killers of the late Gamshadzahi should be arrested and punished according to the judicial rules after investigation. People must help to bring the killers to justice. Experience has shown that peace establishes when people hand over the murders to the pertinent authorities.”

Imam of the Grand Makki Mosque of Zahedan emphasized on patience and forgiveness and said that forgiveness was one of the characteristics of brave and courageous people.

In his last points, Shaikh Abdol-Hamid prayed for Haji Karim-Bakhsh for forgiveness and advised the people to maintain security and pursue the case through legal means.