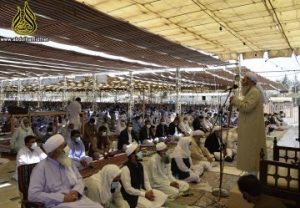 Warning the dangerous consequences of sin and corruption for society, the prominent Sunni scholar of Iran stressed the need to confront sins and corruption and urged on reforming the society and fulfilling the duty of enjoining the good and forbidding the evil in his Friday speech of Zahedan on Nov 19, 2021.

“In a society where there is corruption, denial and misdeeds, that society will never be safe, especially if people of the society are indifferent to sins and abnormalities and are not fulfilling their responsibility of enjoining the good and forbidding the evil; Allah the Almighty makes such a society insecure”, Shaikh Abdol-Hamid addressed the Friday worshipers in Zahedan’s Grand Musalla.

The Friday prayer leader of Sunnis in Zahedan continued: “All kinds of sins, such as theft, addiction, indecency, murder, drinking alcohol, violating the rights of women and orphans, and other denials and corruptions cause divine punishment in the society.”

“Most torments occur in the early morning when many people are asleep and cannot escape to save themselves”, he said.

Referring to the recent earthquake in Hormozgan province, Shaikh Abdol-Hamid said: “A few days ago, a strong earthquake took place in Hormozgan, which did not cause any casualties and caused a little damage. Earthquakes, droughts, floods, massive fires, viruses like Covid-19 and other pests and viruses are the Lord’s corps that threaten the people because of their sins. Although these events seem causal and natural, but in fact they come from Almighty Allah to awake the people.”

Emphasizing on the importance of reforming the society, Shaikh Abdol-Hamid urged on confronting the sins and said: “The reform of the society is one of the most important duties of human beings and Muslims. We must all strive hard to reform and build our society, and make it better. We should fulfill our duty of enjoining the good and forbidding the evil.”

Security forces should deal with bandits legally
President of Darululoom Zahedan further alluded to some cases of robberies that have been taking place in Zahedan for months and said: “According to the received reports, unfortunately, robberies have been increasing in Zahedan in recent days. Some motorcyclist robbers threaten the people and plunder their mobile phones; this is very ugly.”

He considered responsibility of people and the official bureaus against insecurities very big and said: “If people and security forces carry out their duty well, there will be no insecurity and problems in the city”.

To protect the society from thieves and insecurities, Shaikh Abdol-Hamid urged that both the government and the family elders must seriously take control over the society by fulfilling their responsibilities.

“Families have to raise their children properly, have a watch on them, as well as the security forces should treat the robbers through legal means”, he underlined.

Concluding his Friday speech of Zahedan, Shaikh-ul-Islam Mawlana Abdol-Hamid considered earning the lawful living as one of the most important duties of Muslims and said: “Be content with earning a Halal income, even if it is low and strictly avoid Haram and unlawful income.”

“A forbidden earning destroys one’s life; it is a big injustice for the heads of the families to give a forbidden food to their children”, he added more.