Shaikh-ul-Islam Repeats his Opposition to Division of Balochistan 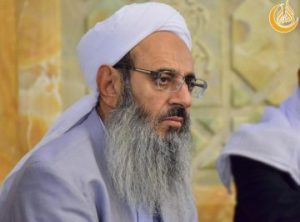 Following leaked statement of a member of the national assembly who vows to divide the province of Sistan-Balochistan in the southeast of Iran, the most influential Baloch leader repeated his disagreement with any possible plan of division.

In a message posted on the Twitter account of Mawlana Abdol-Hamid, he stated that instead of dividing the province for development, discriminatory policies should be removed.

President of Darululoom Zahedan said: “The geography of Sistan-Balochistan is such that each part complements the other parts; its people also complement each other.”

“To remove deprivation from this province and ensuring it development, the empathy and solidarity of people is necessary; this can be achieved by implementation of justice among ethnic and religious communities and eliminating discrimination, not by dividing the province,” Mawlana Abdol-Hamid underlined.