Shaikh Abdol-Hamid Travels to the South of Balochistan 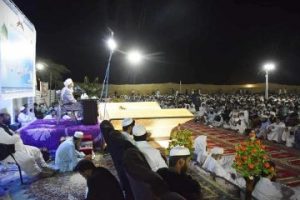 In a six-day trip to the southern regions of Iranian Balochistan, the most influential Iranian Sunni leader met with various classes of the people. During his visits, from Oct. 29 to Nov. 3, 2021, he listened to people and examined their concerns, calling them on to practice the Shari’ah commands. He also urged on the government and officials to fulfill the legitimate demands of the people.

Shaikh Abdol-Hamid mainly visited the coastal cities of Chabahar and Konarak and some other southern cities of Balochistan where he took part in public gatherings.

He held various meetings with different classes of the people including clerics, academics and tribal elders.

In his speeches, the prominent Sunni leader of Iran raised the issue of the Makoran beach development plan and called on the authorities not to deprive the people of Balochistan of the benefits of the Chabahar shore and to respect and fulfill people’s due rights.

In his speech in the Friday prayer ceremony of Chabahar, Shaikh-ul-Islam Mawlana Abdol-Hamid emphasized on the importance of education and on reforming the society.

Describing the faith and guidance as Allah’s two best blessings on humanity, the Friday prayer leader of Sunnis in Zahedan said: “Guidance means distinguishing the truth from the false and the wrong from the right”.

“As it’s vital to believe in the truth, it is also necessary to always follow the truth”, he urged.

Shaikh Abdol-Hamid asked officials to solve the economic problems of Balochistan, remove poverty by producing jobs for the unemployed people and pay special attention to the residents of borders and coastal areas of Balochistan.

Nobandian’s meeting
Shaikh Abdol-Hamid’s another program in this trip was giving a speech at Darululoom Nobandian among academics, school teachers and clerics from different parts of Dashtiari.

In this meeting that was held in the Grand Mosque of Nobandian on Sunday evening Oct. 31, Shaikh Abdol-Hamid considered the role of the scholars and the educated people decisive in reforming the society and said: “As scholars and thinkers have a virtue, their mission is also very big”.

“Reforming the society and purifying the people are among the most important duties of scholars”, Shaikh Abdol-Hamid addressed the academics and the Ulama in Darululoom Nobandian.

Among the representatives of Chabahar’s Free Zone’s traders
A group of representatives and owners of commercial malls in the Chabahar Free Zone met with Mawlana Abdol-Hamid on Monday morning in Tis.

During this meeting, the traders raised their economic problems and concerns with Shaikh Abdol-Hamid; he listened to them and urged that the problems must be resolved soon.

Shaikh Abdol-Hamid reached Pishin of Rask County before noon on Tuesday and was welcomed by thousands of people at the entrance of the city of Pishin.

The Iranian Sunnis’ leader asked Allah for complete forgiveness for the late Mufti Nezamuddin Rawanbod, one of the prominent scholars of Iranian Balochistan who passed away in recent days. Shaikh Abdol-Hamid considered his death as a great loss to the society and expressed his sympathy with the people of Pishin city.

“Shaikh Nezamuddin was a great and a pious personality who served the nation sincerely”, said the prominent scholar of Balochistan.

Talking to students in Sarbaz
In a meeting of scholars with academics in Sarbaz on Wednesday evening, Shaikh Abdol-Hamid praised such meetings and considered them essential. He urged that such meetings should be held continuously.

Shaikh Abdol-Hamid held various reform and reconciliation meetings in different southern cities of Balochistan and inspired Muslims to return to the guidance and directions of the Holy Qur’an and instructions of the holy prophet Muhammad, peace be upon him.
In this trip, he also visited Souro, Pollan, Rask, Pashamag and Kuhwan where he took part in some graduation ceremonies and met with students and scholars.