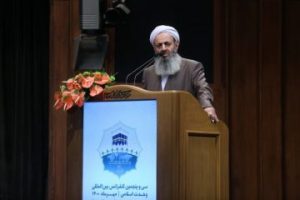 Speaking at the 35th International Islamic Unity Conference in Tehran, held on Saturday 23rd Oct. 2021, while decrying extremism, the most influential Iranian Sunni leader urged that the unity should be the strategy of the Islamic Ummah.

President of Darululoom Zahedan continued: “When Muslims turned away from the teachings of Islam they faced various kinds of problems”.

He added: “Today’s Muslims can lead the world if they use the capacity of Islam, as Muslims in the beginning of Islam used the highest capacities of Islam and led the world”.

He called the growth of extremism as a sinister phenomenon and said: “Unfortunately, divisions among Muslims and in their countries have become a strategy of global arrogance and international Zionism. Such a situation demands that Muslims should make the unity as a strategy in the world”.

“Unity is a need; some scholars feel this necessity but they are not given the opportunity by Muslim countries to work in this field”, said the most outstanding Sunni scholar of Iran.

Shaikh-ul-Islam Mawlana Abdol-Hamid stressed that those who work in the field of unity should have a broad vision and a high capacity.

“Allah helps those who have a high vision and tolerate others. To achieve unity, we must respect the rights of minorities, ethnicities and religions”, said Shaikh Abdol-Hamid.

“When we call for unity in the world, we must pay the cost in this way. Unity must be based on the Qur’an and Sunnah,” he believed.

The Iranian Sunnis’ leader further addressed the leaders of the Muslim world by saying: “I advise all governments to respect the rights of ethnic groups and religions”.

“I have condemned the two explosions that recently took place in the mosques of our Shiite brothers in Afghanistan and advised the Afghan government to provide the security of the Shiite religious centers”, he said in his last points.