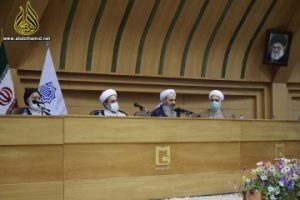 In a meeting that was held in the university of Sistan-Balochistan of Zahedan on Tuesday, October 19, 2021, the most influential Iranian Sunni leader called the Qur’an and Sunnah as two axes of unity. A group of provincial and national officials took part in the meeting to celebrate the Islamic Unity week.

Shaikh Abdol-Hamid believed that Muslims must be aware of the enemy’s conspiracies and forbade the Islamic Ummah from division and discord.

“If Muslims follow these two sources, they will never need others”, he said.

Explaining verses 100 to 105 of Surah Al-Imran, Shaikh Abdol-Hamid said: “In these verses, Allah refers to the plots of the Jews and the Christians and warns the Muslims that if they follow the People of the Book (Jews and Christians), they will be expelled by them.”

“Allah has mentioned three important principles in this chapter; if Muslims follow these three principles, they will be safe from the conspiracies of the enemies and will be successful in this world and the hereafter. The first principle is the piety. Allah has commanded Muslims to be pious everywhere. Piety means that Muslims must avoid, not only infidelity and polytheism, but should also avoid sin and corruption and even suspicion,” he added more.

The Iranian Sunnis’ leader described avoiding division as the second principle and said: “As long as Muslims aren’t adhered to this principle, they won’t gain dignity and will not be able to deal with challenges.”

“Allah has warned Muslims not to be like the People of the Book. They lost all their achievements and dignity due to contentions and divisions”, said the president of Darululoom Zahedan.

The most outstanding Sunni scholar of Iran continued: “Unity leads to victory, and discord and division lead to defeat. Divisions and contentions had defeated big powers and nations. Unity is vital. All Muslims must respect each other; especially sanctities and holy objects.”

The Friday Imam of Sunnis in Zahedan stressed on the importance of unity and believed that Muslims should try hard to achieve peace and unity.

Mawlana Abdol-Hamid went on to say: “Today, the enemies of Islam try to create divisions among Muslims by diverting them from the path of unity. The enemies want to engage the Muslims in extremism so that Muslims may attack each other’s mosques and places of worship”.

“In such a situation, Muslims must know the enemies and be aware of their sinister conspiracies to be saved from their traps”, he urged.