Dignity of Mankind, in Obedience to Divine Commands 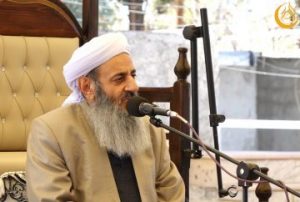 Emphasizing on the importance of practicing the divine commands, especially on offering prayers and paying Zakah, the most outstanding Sunni scholar of Iran considered the dignity of the people in obedience to Allah’s commands.

Talking to tens of thousands of worshippers before the Friday prayers in Zahedan’s grand Musalla on Oct. 8, 2021, Shaikh Abdol-Hamid said: “Allah is the All-Wise; He has created everything based on wisdom. He has created every creature for a particular purpose according to His knowledge. Human beings have been created to worship Allah; so people are obliged to worship and obey Him”.

Shaikh Abdol-Hamid further said: “It isn’t appropriate to follow the devil, commit sins and do evil deeds. The people who disobey Allah, they deserve to be punished by Allah, but He gives them time to repent”, said the Friday prayer leader of Sunnis in Zahedan.

“The beauty of people is in offering prayers and carrying out the divine commands; Allah loves prayers and jihad, which is the defense of the truth. The lines of prayers and jihad are among the best and most beloved lines before Allah,” the president of Darululoom Zahedan continued.

“Some Muslims stop their cars and vehicles on road sides while traveling to offer their prayers; seeing such scenes are gratifying”, said Shaikh Abdol-Hamid.

“The excused and disable people can offer prayers at home, but many excused endure difficulties and attend the mosques by wheelchairs; this is an attractive scene”, he added more.

Referring to the virtues of charity, Mawlana Abdol-Hamid said: “The reward of giving alms in the way of Allah the Almighty increases to seven hundred times”.

Shaikh Abdol-Hamid insisted on the importance of paying Zakah although all property is lost and on offering the prayers even though the body is sick.

“Zakah is the pillar of Islam, if it is not paid, it will become a torment on the Day of Judgment. We were created to worship and obey God; the dignity of the people is to worship Allah and oppose Satan. Friends and guests shouldn’t be more important than God’s commands. We should not violate God’s commands for the sake of the guest and commit sin”.

He continued: “Many hosts bring opium and alcohol for their guests. Guest is God’s mercy, but the guest who wants opium and alcohol is God’s torment. Avoid smoking. Smoking leads to addiction; it damages body and wealth and has no benefit. Addiction, alcohol, corruption and murder are dangerous for the society”.

“I’d like to advise all citizens, specifically the young generation to look for the right jobs and skills. Learn the Holy Qur’an, serve your community and help others”, the most influential Iranian Sunni leader urged.

At the end of his speech, Shaikh Abdol-Hamid encouraged the people to participate in building the construction of the grand Makki Mosque of Zahedan, the largest Mosque of Sunni community in Iran.