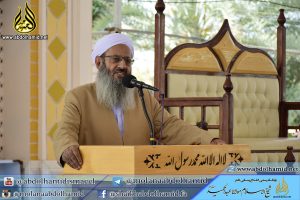 Referring to the start of president Raisi’s administration and approval of the members of his cabinet, Mawlana Abdol-Hamid, the most outstanding Iranian Sunni leader alluded to the economic and political crises of Iran and expressed hope that the new president would solve country’s foreign and domestic problems by adopting proper policies and removing discrimination.

He was talking to Sunni worshippers in Zahedan’s Friday gathering on August 27, 2021.

Shaikh Abdol-Hamid said: “We are happy that the members of president Raisi’s cabinet were approved by the parliament and the first official meeting of President Raisi’s administration was held”.

The Friday prayer leader of Sunnis in Zahedan expressed hope that president Raisi could be able to remove poverty and unemployment, lift sanctions, and solve the problems by taking a new and correct approach.

To address the domestic and foreign challenges, he stressed on the necessity of changing the current policies.

“I hope that president Raisi will engage specialists, experts and capable people from different backgrounds to solve the basic problems of the country”, said the prominent Sunni scholar of Iran.

“President Raisi said in his inauguration ceremony that he would solve problems by amending some clauses of the constitution”, president of Darululoom Zahedan said.

“Many problems of the past will be resolved by implementing justice, changing the approach, and appointing the elites and experts of the ethnic and religious communities of the country”, Shaikh Abdol-Hamid believed.

“Elites and experts of ethnic and religious communities should not be excluded from key positions, at the provincial and national levels. All sects, religions and tribes in Iran should be hopeful to the Raisi’s administration”, Shaikh Abdol-Hamid emphasized.

Mawlana Abdol-Hamid considered people’s health and their protection of COVID 19 as the most important tasks of the new president and said: “As president Raisi announced, I also warned that the health of the people must be in the first of the president Raisi’s plans, this issue should be considered by the authorities.

Mawlana Abdol-Hamid urged: “The authorities of prison aren’t allowed to torture or abuse prisoners. The crime of the detained and accused individuals is determined by judges. Abuse of prisoners is the violation of the constitution and contrary to the Islamic laws. Such clashes defame Islam and have dangerous consequences for our country and nation”.

The Kabul airport attack was shocking
Referring to the deadly bomb blasts outside Kabul airport, Shaikh Abdol-Hamid called the attacks shocking and said: “The terrorist attacks around Kabul airport which left dozens of people killed and injured, were very shocking.”

“I hope that with the establishment of the Islamic system in Afghanistan, insecurities and differences will be eliminated forever and an Islamic system will prevail there”, the Iranian Sunnis’ leader said.

“Be sure that the best system in the world is the Islamic and divine system”, he added more.

Shaikh Abdol-Hamid continued: “I hope that the Islamic Emirate will use the capacities of Islam and will follow the instructions of Holy Qur’an and Sunnah of the Holy Prophet Muhammad PBUH and the character of righteous caliphs. We hope that they will form an inclusive government that respects the rights of all”.

“Afghanistan has been involving in war and insecurities for decades. Now the war and conflict must end in this country”, the eminent Sunni scholar of Sistan-Balochistan said.

Shaikh Abdol-Hamid addressed the Afghan nation: “As a well-wisher and as a neighbor of Afghanistan, we have always prayed for you, we ask you to put an end to war, lay down your arms and solve your problems through negotiation and dialogue. Be careful not to be provoked by enemies”.

“Whoever incites the Afghan people to fight with each other, is the enemy of Afghanistan”, president of Darululoom Zahedan said.

“I advise the Islamic Emirate, scholars and decision-makers of the new system to be extremely careful in making laws. Adopt laws according to the needs and demands of the modern and new age. Choose the easiest verdict in issuing fatwas and making laws for masses so that people can easily follow the Shari’ah laws. This is the way of the Qur’an and the prophet Muhammad PBUH”, said Imam of the grand Makki Mosque of Zahedan.

Shaikh Abdol-Hamid concluded his speech by saying: “If true Islam is implemented in Afghanistan, Afghanistan will experience a bright future, contrary to the propaganda of the world”.