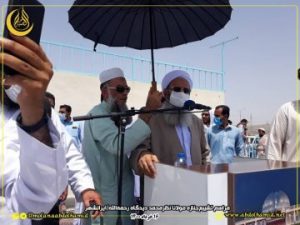 Talking to tens of thousands attendees in the ceremony, Mawlana Abdol-Hamid said: “Mawlana Nazar Mohammad was a great, well-known personality and a prominent scholar who served the community with sincerity”.

Mawlana Didgah passed away on Saturday 5th June in a local hospital in his hometown of Iranshahr. He was an active Islamic scholar and political activist serving as local city council member of Iranshahr for 16 years. After the revolution in 1979, he was elected as the representative of Iranshahr and Sarbaz in the Iranian new parliament (Consultative Islamic Council) in the first term.

The most influential Iranian Sunni leader called the death of Shaikh Didgah a great loss to the society, especially for Islamic scholars and seminaries.

Calling Shaikh Nazar Mohammad as a scientific, political and a national figure, president of Darululoom Zahedan said: “Mawlana Nazar Mohammad was a prominent scientific figure and known in the region and in the country. Most people and officials were familiar with this prominent figure”.

The Friday prayer leader of Sunnis in Zahedan continued: “Shaikh Didgah was a brave, sincere and compassionate personality who resolved big disputes of people.”

Mawlana Abdol-Hamid called Shaikh Nazar Mohammad’s passing a great loss and a failure for the scientific community first, then for the Sunni community all over the country.

The Iranian Sunnis’ leader pointed out: “We all are saddened because we have lost a great, scientific and passionate figure”.

“I offer my condolences on the death of Mawlana Didgah to all scholars and people, especially to his family and children”, he added.

Expressing his deep regret over a massacre of members of a family, including six children in Zahedan and the murder of Mawlawi Aziz-ul-Rahman Mollazadeh in Iranshahr, Shaikh Abdol-Hamid called these incidents shocking and unacceptable.

He advised and emphasized on returning to Allah the Almighty and on reforming and serving the society in the face of such miserable situations.

President of Darululoom Zahedan went on to say more: Death of Ulama makes our duty heavier’.
“We fail to do our duty and mission, when we witness such unfortunate events and incidents in our society”, said Shaikh Abdol-Hamid.

“Therefore, the scholars, well-wishers and sympathizers of the region must reform the society by confronting the negligence, sin and different kinds of problems”, he urged.

The funeral prayer was offered by Shaikh-ul-Islam Mawlana Abdol-Hamid. The funeral prayer of Aziz-ur-Rahman Mollazadeh, one of the young scholars of Iranshahr who was killed at the same day, was also offered in this ceremony.