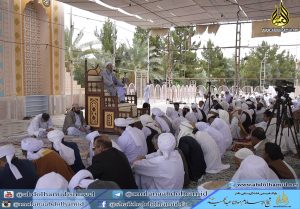 The Friday Imam of Sunnis in Zahedan advised worshippers to bring a change in their lives and emphasized on making progress in all material and spiritual arenas of the life. He was talking in the Friday sermon of March 19, 2021.

Shaikh Abdol-Hamid stated: “Allah has created this world with diversity; years, seasons, months, weeks, nights and days are changing. This [solar Hijri] year is going to an end and the year of 1400 begins. Developments and diversity in the world are proofs that the life of human beings is variable.”

“As a Muslim, each of us should be strong in belief and morality and follow guidance and instructions of the Prophet Muhammad PBUH in all aspects of the life”, said the prominent Sunni scholar of Iran.

“Have we taken steps to improve our faith? Why there is still weakness in our lives? Why we have not progressed in science and spiritual matters?” Shaikh Abdol-Hamid questioned.

“We must repent to Allah the Almighty and change and correct ourselves”, Shaikh Abdol-Hamid further said.

“Rulers and officials should also think on bringing changes in laws and regulations”, the most influential Iranian Sunni leader addressed the officials.

“With the changing of nights and days and seasons and years, we should also bring changes in our spiritual affairs”, he said.

President of Darululoom Zahedan continued: “Many of people who used to carry out good deeds and attended mosques and Friday prayers, have left the mosques or become weak after the pandemic of the COVID 19”.

“Why Muslims don’t follow the Prophet’s Sunnah? Why is our behavior and morals different from the behavior of real Muslims?” he further questioned.

In a part of his Friday sermon, Shaikh-ul-Islam Mawlana Abdol-Hamid stressed on the necessity of learning the Holy Qur’an and said: “We must try to acquire knowledge until we are alive. Alas! We are far away from the instructions of the Holy Qur’an and the prophet Muhammad PBUH”, Friday prayer leader of Sunnis in Zahedan said.

He further emphasized: “Carry out better acts in the year ahead 1400. Make a firm decision to change yourself and get closer to Allah. Obey and worship Allah until the last breath of life”.

Mawlana Abdol-Hamid stressed on preparing for the life after the death and said: “We will all die one day; good luck for those who worship and remember God and go to the grave with good deeds. The blessed are those who follow the path of the righteous people; alas for those who commit sins and follow the desires of the soul.”

At the end of his speech, Imam of the Grand Makki Mosque of Zahedan said: “We should always think about the Hereafter life and grave, we should follow the teachings of the Holy Qur’an so that we will not feel ashamed in front of the Messenger of God, the companions and the righteous people, on the Day of Judgment.”

“Fear the torment of Doomsday when human beings will be questioned about the rights of the people and rights of God on that day”, president of Darululoom Zahedan said.