West should Realize Importance of the Prophet Muhammad PBUH for Muslims 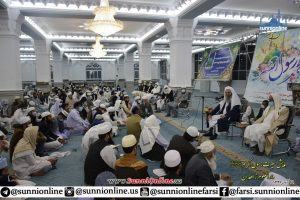 Shaikh Abdol-Hamid considered the Prophet Muhammad as the best role model of all human beings in all aspects of life and urged on the Western world to realize the love of Muslims to the prophet Muhammad, peace be upon him.


The most influential Sunni leader of Iran said in the Seerah conference held at the Grand Makki mosque by Darululoom Zahedan on Nov. 11, 2020: “In such a situation, a Muslim should be aware and have more efforts in promotion of Sunnah of the last messenger of Allah the Almighty”.

“Muslims must revive the character and life of the Holy Prophet and defend Islam and the Prophet strongly”, president of Darululoom Zahedan said.

Addressing the world leaders, the Iranian Sunnis leader said: “Leaders of European countries, France, the United Nations, etc. must know that the love of the Prophet Muhammad PBUH is in the heart of every Muslim all over the globe”.

Shaikh Abdol-Hamid urged: “Defending the Holy the Prophet must be the most important responsibility of a Muslim than anything else”.

“Together, in such circumstances, the leaders of the Islamic countries should not remain silent, but defend the dignity of Islam and the sanctity of the Prophet”, Friday prayer leader of Sunnis in Zahedan said.

At the end of the meeting, Shaikh Abdol-Hamid called the world leaders for enactment of an international law banning insults to the sanctities of religions and sects, and said: “A law should be passed internationally that prohibits insults to the prophets and the sanctities of religions and sects; this is in accordance with the interests of the world.