Trusting in Allah, an Important Teaching of Islam 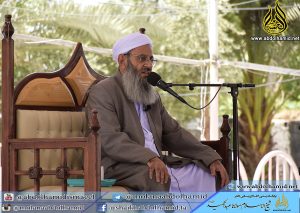 Pointing out to the status of “trust” in the Islamic teachings, Shaikh Abdol-Hamid urged on the necessity of putting trust in Allah and resorting to good deeds in the face of difficulties, in his Friday speech of August 8, 2020.

In this regard, Shaikh Abdol-Hamid said: “Throughout history, enemies of Islam have tried to confront Islamic guidance and teachings in order to change the principles and instructions of Islam. For example, ‘Jihad’ is one of the teachings of Islam which enemies of Islam are trying to eliminate it”.

Friday prayer leader of Sunnis in Zahedan continued: “Unfortunately, many Muslims are wrong about jihad and the place of its application and philosophy. They only look at some verses of the Holy Qur’an and Hadiths without researching and comparing them with the instructions of the Holy Prophet (PBUH). The enemies of Islam have been trying to take out many of these teachings”.

President of Darululoom Zahedan added: “Another teaching of Islam is ‘trusting in Allah’ that the enemies are trying to weaken this belief among Muslims. They want to inspire Muslims that everything in the world depends on apparent causes.

“Monotheism is in the nature of every human being, so that when he/she gets stuck he/she turns to Allah the Almighty. All heaven religions, including Islam, have taught us that we should always put our focus to Allah; because everything is in the hands of Allah. When you are sick, doctor is the cause and healer and the Lord of the causes is Allah. When we take medicine, we should trust in Allah. When we use the means, we should put our trust to Him,” he further said.

The outstanding scholar of Sunnis in Iran stated: “Once the Holy Prophet PBUH and his companions stayed somewhere on their way while returning from the battle of “ِDhāt al-Riqā” to rest in a place. The Prophet PBUH, under the shade of a tree, closed his eyes for a moment; when he opened his eyes he saw that a man from the enemies had drawn his sword and was ready to attack. When the person saw that the Holy Prophet (peace and blessings of Allah be upon him) had opened his eyes, he said to him: “Who can save you from me?” The Prophet said: “Allah!” When he heard this, he was terrified and lost his sword. The Prophet took the sword and said to him: “Now who will save you from me?” The infidel begged the Holy Prophet to release him. The Holy Prophet PBUH asked him to embrace Islam. He said, “I will not become a Muslim, but I promise that from now on I will not fight against you or help anyone against you.” The Prophet PBUH abandoned him”.

Shaikh Abdol-Hamid pointed out: “From this action of the Holy Prophet and the release of the infidel, it is clear that jihad in Islam is not with non-Muslims unconditional and those who live peacefully and do not pose any danger to Muslims, but jihad in Islam is against aggressors, arrogant and oppressors”.

He added: “In Madinah, Jews and polytheists also lived alongside Muslims and the Holy Prophet PBUH and Muslims had nothing to do with them”.

“Islam has taught us peace”, he said.

While continuing to explain the discussion of “trust”, Shaikh Abdol-Hamid said: “One of the basic teachings in Islam is to focus on Allah in everything and turn to Him. The Messenger of Allah, peace and blessings of Allah be upon him, resorted to prayers in all difficulties and sufferings; he communicated with Allah through prayers and asked Him for help”.

He emphasized: “We should consider all blessings from Allah and know that all problems and sufferings come with Allah’s permission, rather they are the results of our actions. So we should resort to Allah through prayers, remembrance and supplication when there are problems.

Friday Imam of Sunnis in Zahedan continued: “Othman equipped army of Muslims, called “Jaish al-Usrah” during the formation of the Islamic army. The Holy Prophet PBUH announced three times: ‘Who equip this army that is going to fight the Romans?’ On all three occasions, Sayyidana Othman stood up and announced that he was ready to equip the army; each time, he provided a hundred camels with equipment to the Islamic Corps”.

Continuing to express the virtues of Sayyidana Othman, Shaikh Abdol-Hamid said: “When Muslims needed water, the Holy Prophet PBUH announced: ‘Whoever builds a certain well and gives it to the Muslims, his place is the Paradise’; Sayyidana Othman accepted this responsibility and built a well and handed it over to the Muslims.”

Shaikh Abdol-Hamid went on to say that Abu-Bakr, Omar, Othman, and Ali were the members of “Ahlul-Bayt” and households of the Holy Prophet PBUH.

He stated: “According to a hadith, all the pious people considered to be the households of the Holy Prophet PBUH”.

We express our condolences to the people of Lebanon
In the last part of his speech, the most influential scholar of Sunnis in Iran alluded to the recent fatal bomb explosions in the port of Beirut and said: “In the explosion which took place in Beirut and left dozens dead and wounded, we express our sympathy with the dear Lebanese people and share our grief with them.”

“We express our sympathy with every human being, whether he/she Muslim or non-Muslim, wherever he/she is oppressed in the world”, he added.

“The Beirut explosion caused too many damages; the exact cause of the explosion is still unknown,” he said.

“May Allah protect all Muslims and all people of the world from different diseases, pests, calamities, insecurities and damages”, he added.