Shaikh Ab. Hamid in the inauguration ceremony of "SunniOnline Russian": 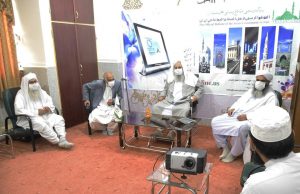 Talking at the unveiling ceremony of the Russian language section of “SunniOnline”, Shaikh Abdol-Hamid described the media and press activities as the most valuable services to a society.

President of Darululoom Zahedan considered the media activities as a sort of jihad as well.

The Iranian Sunnis leader said: “Islam is a comprehensive religion that has high potentials and capacities, and the mission of the Holy Prophet (PBUH) had also been universal. The Holy Prophet has been sent to all the worlds. Therefore, we should also think universally and plan and strive for the reform and guidance of humanity”, the most influential Iranian Sunni scholar expressed his ideas.

Referring to his recent trip to the Republic of Tatarstan, Shaikh Abdol-Hamid pointed to the great interest of the people of Tatarstan in Islam and said: “We should convey the message of Islam to the nations of the world in different languages and broadcast the correct news of Islam to the world.”

Shaikh Abdol-Hamid went on to describe the importance of media activities by saying: “Media and press activities are among the best and most valuable activities, which are a sort of “jihad”.

“Paying attention on media affairs is much more important than civil and construction affairs. More planning should be done in this field”, he added more.

SunniOnline is the official news portal of the Sunni community in Iran which has been working under the supervision of Darululoom Zahedan in the southeast of Iran. It has been active in five languages; Persian, Arabic, English, Urdu and Baluchi and since now by adding Russian language in the menu, the contents of this website will be published in six languages.