Use the Causes but See the Real Creator 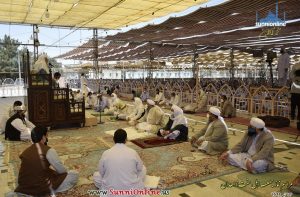 Shaikh Abdol-Hamid said in his Friday speech of July 3, 2020 that the world we live in was the world of causes and obvious tools.

He continued: “Allah has commanded us to use tools, but we should consider Him as the Creator of the means. It is Allah who raises the clouds as steam from the sea, turns them into clouds, leads them where He wills, and rains them out”.

“Allah sends down the rain; so when it is not raining, the Istisqa prayer (seeking rain prayer) is held, but those who are blind by heart don’t see Allah; they think that it is a mere cloud that rains”, he said.

“People see COVID 19 and medicines which are the causes, but do not consider the Creator of the causes, while we are commanded to use medicine and tools seeing the Lord of the causes Who sends diseases”, president of Darululoom Zahedan said.

He added: “Islam and the Qur’an have commanded you to take the tools and trust in God. Unfortunately, some people do not use the tools and claim to put trust in Allah; they want to go a few steps further than Allah and the Holy Prophet (peace and blessings of Allah be upon him)”.

“If you are trustworthy, you should consider Allah and His Messenger; use tools, then put your trust in Allah. This is “insight”, he added more.

“Floods, famines, earthquakes, droughts and various plagues come with Allah’s permission. Allah wants to make us understand that everything is in the hand of Allah”, the Iranian Sunnis leader said.

He continued: “We should change ourselves and return to Allah. Avoid extravagance, negligence, and sin, and resort to divine mercy; take care of the weak and the needy, to be saved from divine punishments”.

Shaikh Abdol-Hamid said: “See Allah in every blessing, as well as see your shortcomings and then Allah at the time of every calamity”. Throughout history, when human beings faced problems and calamities they forced to turn to nature and utter the name “Allah”. In the same disease, in many countries, some who were far from Allah, they gathered and resorted to Allah”, the outstanding scholar of Sunnis in Iran said.

He pointed out that it was the Sunnah of the prophets and the saints to return to Allah when they faced difficulties. “Allah is the Creator and does not need anyone, everyone needs Him”, he added more.

He continued: “O people of the world! Stop worship of creatures, woods, idols, graves and stones.”

Shaikh Abdol-Hamid said: “Allah wants to make it clear to you that you could not find a cure for COVID 19 in the world; so you should return to God, the Creator of the causes.”

“See Allah everywhere. If you want something, but Allah does not want it to happen, nothing will happen. Do not turn away from Allah. Leave corruption, bloodshed and oppression”, he added more.

Shaikh Abdol-Hamid continued: “Corona’s message is that we should reconsider our lives and actions. Allah has brought this disease so that we can return to Him and resort to supplication and prayers”.

He said: “Many people think that these statements are made in favor of the government, while the transportation and trafficking of narcotics, in addition to the legal prohibition, is also prohibited by the Islamic laws”.

“Leave such trades and ask from Allah your livelihood”, he urged.

“Everyone in the world earns and eats, do the ones sell narcotics eat and wear more?” Shaikh Abdol-Hamid questioned.

He added: “Earn less but more easily, invest your money in business and in the right ways and stop drug and alcohol selling.”

Khateeb of Sunnis further said: “Dear people of Balochistan! The narcotics deal has hit us and destroyed our region. Our best young people have been killed in this way, and government soldiers have been martyred, too. People obtained less money and more debts by trade of narcotics.”

Baloch women should avoid extravagance in clothing
Shaikh Abdol-Hamid continued his speech by forbidding women from “extravagance in using clothes” and said: “My message to dear women and sisters is, not to waste money on clothing. There are people who can’t afford to buy expensive clothes and are forced to choose wrong ways to earn money. Instead of expensive dresses, they can prefer simple and cheap dresses”.

Shaikh Jahandideh sacrificed his life for Islam and people
In the final part of his speech, Friday Imam of Sunnis in Zahedan expressed his condolences over the death of Shaikh Abdol-Hamid Jahandideh and said: “Shaikh Jahandideh was one of our prominent figures in the region.”

He continued: “Shaikh Jahandideh, may God have mercy on him was a sincere scholar who did not ask people for money for himself, but he sacrificed himself for Islam and people. He did not eat in the name of religion, but spent his money for Islam.”

“May Allah place him in the best of blessings, raise his ranks, and accept the services he has rendered and continue his way”, Shaikh Abdol-Hamid said.