‘Housing Foundation should not limit allotment for common people’ 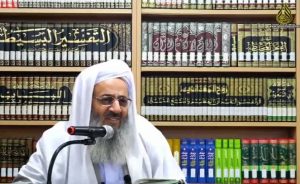 Referring to housing problems in Sistan-Baluchistan, Shaikh Abdol-Hamid called on the Housing Foundation and the Natural Resources Organization, to not restrict allotment of land to common people.

While Interpretation of the Holy Qur’an at Darululoom Zahedan, Shaikh Abdol-Hamid referred to the recent fire in Chabahar’s slum houses in Jangalok and demanded the authorities to ease regulations of allotment of land on Wednesday May 13, 2020.

The fire destroyed slum houses and left many people homeless.

Shaikh Abdol-Hamid said that there were talks among people about the subject which could not be confirmed or denied.

He criticized the authorities for creating obstacles in allotting lands to the people of Baluchistan properly and said: “The people who lost their homes in this incident are Iranians. They should be allotted land for building houses”.

“Is Chabahar has no land that Jangalok’s residents were forced to live in slum houses?” Friday Imam of Sunnis in Zahedan questioned.

The outstanding leader of Sunnis in Iran said: “Sistan-Baluchistan is a large province and its population is small that has a high capacity for housing”.

The president of Darululoom Zahedan continued that due to inflation and high prices, common people cannot afford to buy a land and even they cannot pay lease.

Shaikh Abdol-Hamid strongly defended the homeless people of Iran and believed that the lands belong to the nation. The government has a duty to hand over the lands free to the people. it is their duty to serve people and solve their problems especially the problem of housing and welfare.

The most influential scholar of Sunnis in Iran pointed to the bravery resistance of the people of Baluchistan who fought the British occupiers to protect their land. He said that their ancestors were killed in defending these lands. So the government should allot them lands freely.

At the end, the Imam of Grand Makki Mosque of Zahedan called on the authorities and the Housing Foundation to remove the restrictions on allotment and housing, saying that people cannot rent a house.

“The people who had always listened to the officials, their housing problems should be resolved”, he added.