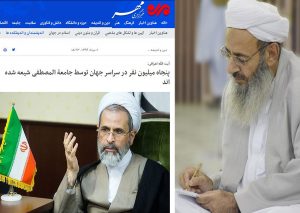 Sending a letter to Ayatollah A’rafi, the rector of all Shiite seminaries in Iran, Shaikh Abdol-Hamid referred to his recent remarks over al-Mustafa University’s religious activities.

The most outstanding Iranian Sunni leader has said that his criticism was only for “reformation” and “well-wishing”. He invited the administrators of the seminary for transparency in educational system and called them to change their policies in this field.

Shaikh Abdol-Hamid believed that thousands of foreign Sunni students were studying at that seminary who were unaware of their faith.

He also had said in the video statement that Chinese students of Qom are the root cause of Corona virus in Iran as there was no travel ban between Iran and China during the spread of the virus in China.

Mawlana Abdol-Hamid presented his evidences of his statement and urged on transparency.

The president of Darululoom Zahedan said: “Obviously those fifty million were Sunnis; because you explained to the Shiites abroad what services you did for the Shiites. But the question is that are those seven thousand Sunni students still adhering to their faith or they have changed their sect?”

Shaikh Abdol-Hamid said that it could be a proud for al-Mustafa seminary to convert fifty million non-Muslims to Islam.

“It is contrary to the custom of the world that the followers of one religion do not have a master of their own religion in any educational center and they learn their faith from others”, Friday Imam of Sunnis in Zahedan said.

Shaikh Abdol-Hamid presented another of his documents, referring to statements of some ex-students of al-Mustafa seminary who contacted him.

He wrote in his letter that Sunni students were taken to Iran with false promises. When they enrolled at al-Mustafa seminary, they saw the condition was contrary to what they were told. This unpleasant situation made some of them to run away from al-Mustafa seminary. But their passports were confiscated for three years. Some wanted to go back home, but they had no money.

Chief of the Coordinating Council of Sunni Seminaries in Sistan-Baluchistan said: “Many Shiites are turning to us for conversion to Sunnis. Some Shiites beg to enroll them in Sunni seminaries, but we do not do so just to maintain unity”.

Shaikh Abdol-Hamid demanded from Iranian leaders to solve Iran’s economic problems instead of expending money to convert people to Shiism.

He believed that Iran was facing problems such as poverty and unemployment that need to be addressed. So the activities of a seminary with highest budget (more than 7 top national universities of Iran) should be clear as the Taqreeb University.

Shaikh Abdol-Hamid said that Mr. A’rafi knows him well and met with him at many conferences; so he is not an extremist.

The most influential scholar of Sunnis in Iran urged that Darululoom Zahedan (Sunnis biggest seminary in Iran) pursues unity, maintains peace and confronts with the extremism.

At the end of his letter, Shaikh Abdol-Hamid called for peace and justice in Iran and around the world.