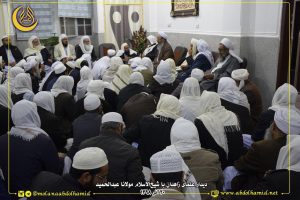 Shaikh-ul-Islam Mawlana Abdol-Hamid insisted on the necessity of acting upon knowledge self-improvement in a joint meeting of Sunni scholars that was held Wednesday 11 Dec. 2019 in Darululoom Zahedan, Iran.

Mawlana Abdol-Hamid said that “self-improvement” and “society reformation” were the purpose of this meeting.

He said: “The biggest injustice for a person is to deceive him/herself by being optimist forgetting grave and the Accountability Day.”

President of Darululoom Zahedan said: “The inciting soul/Nafs-e Ammarah persuades human beings to be selfish and arrogant. It overwhelmingly commands a person to do sin. Therefore we should be concerned about our state after the death and pray to Allah to save us from the calamities of the Hereafter.”

“We have to practice what we learn; there is a close connection between knowledge and practice”, chairman of the Coordinating Council of Baluchistan Seminaries said.

“It can be understood from the teachings of the Holy Qur’an that those scholars who could not practice their knowledge they feel more regret on the Day of Judgment and their accountability will be harder”, he said.

Shaikh Abdol-Hamid said: “Scholars should be obedient to the instructions of the Holy Prophet, peace be upon him, more than others. Ulama’s failure in this regard affects common people.”

“Scholars have a responsibility to make efforts for their families and nations to reform society. As well as they should not neglect themselves,” he concluded his points.