Mawlana Abdol-Hamid among the students in Chabahar: 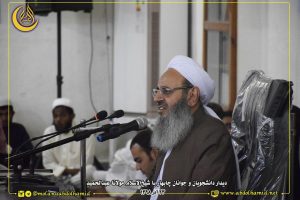 Shaikh-ul-Islam Mawlana Abdol-Hamid called for equality among Iranians in a meeting with Chabahar students on Saturday Dec. 14, 2019 and emphasized that Sunnis should achieve their constitutional rights.

The president of Darululoom Zahedan said that Sunnis are an essential part of the Iranian nation; they should achieve their due rights.

“Forty years after the Islamic revolution, Sunnis’ rights have not been yet addressed; during these forty years, despite being active in all national events, they have been deprived from their due rights”, he pointed out.

“After years of waiting, Sunnis now expect to achieve their freedom; freedom of thought and religion. As well as they should be engaged and contributed in government posts to participate in running the country”, Mawlana abdol-Hamid added.

“Although generally there is freedom, but Sunnis face restrictions in some cities and areas in religious issues”, he said.

The most outstanding Iranian Sunni leader said: “Sunnis’ demands are legal and according to the constitution, we had never raised an issue beyond the law. Now there should be a big change in the case of our rights”.

The Iranian Sunnis outstanding leader pointed out that the rulers should treat equally with all parties, ethnics and religions; equality unites masses and brings them close together.

“According to the constitution, Iranians are equal in law; so the implementation of justice benefits both the government and the nation” he urged.

Mawlana Abdol-Hamid said according to the Islamic Shariah, there is no difference among the members of any religion, ethnicity or party; all have equal rights.

Modified policies and correct planning cut economic crisis
Mawlana Abdol-Hamid pointed out to the current Iranian economic crisis and said: “People have a right to earn easily without facing obstacles, because obstacles lead to depravity, immorality and corruption.”

“A good discipline and modified policies cut economic pressures and minimize the high unemployment”, he believed.

The eminent leader said that problems can be resolved through expertize and consultation with the public.

“Reviewing the past policies and listening to the people will move us forward and bring unity in our society” he said.

Shaikh Abdol-Hamid, in his trip to Chabahar, took part in different meetings with different classes of the society, including students and lecturers of colleges and universities.