Unity, Only Choice for Muslims 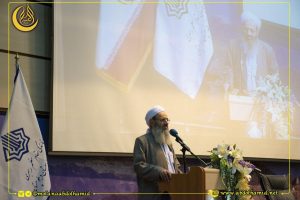 Shaikh-ul-Islam Mawlana Abdol-Hamid emphasized on the necessity of Islamic unity in a ceremony held by the Representation Office of the Supreme Leader in Zahedan on November 10, 2019.

Mawlana Abdol-Hamid said that justice and observation of due rights build lasting unity and this is the view of Islam that is in accordance with wisdom and logic.

He pointed out to the importance of unity in Islamic teachings and said: “The Noble Qur’an and Sunnah have emphasized on “unity”; unity puts nations ahead and produces love and fraternity.”

He pointed to the obstacles on the way of unity and said: “Implementation of justice, providing legal freedoms to all and observation of Islamic and human rights get us to durable unity.”

President of Darululoom Zahedan went on to point out to the consequences of division in societies and said: “Avoid division because differences destroy nations and powers as the Holy prophet, peace be upon him, forbade Muslims from dispersal.”

Mawlana Abdol-Hamid urged on mutual respect and said: “Disrespecting others will raise their voices naturally. All should avoid from harsh language.”

Chairman of the Coordination Council of Sunni Seminaries in Sistan-Balochistan ended his speech by recommending authorities, academics, scholars, politicians and different social classes to avoid emotional and provoking words about each other and take care of unity and fraternity.