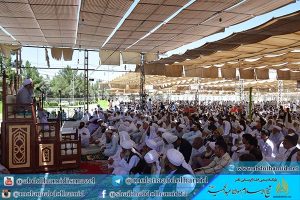 Shaikh-ul-Islam Mawlana Abdol-Hamid has said “senior provincial and national officials should not give opportunity to fanatic sides”. He urged on implementation of justice unbiasedly.

Shaikh-ul-Islam Mawlana Abdol-Hamid, the Friday prayer Imam of Sunnis in Zahedan, said in a part of his speech of Oct. 11, 2019: “The authorities should bring peace and justice to country avoiding ethnic and religious bias.”

He urged: “Justice is one of the most important bases of religion in Islam. It had been a fundamental principle of religions.”

“It is time for different groups and parties to contrast inequality and make effort to bring equality in any country. The rulers should execute justice with no consideration to their ethnic, religious and partial relations and origins.”

President of Darululoom Zahedan further said: “Justice enhances peace and fraternity in any region. Justice is the essential command of Allah to His servants. Justice tells us that all humans are equal and justice should be implemented among them unbiasedly. It is our duty from Allah to preform our task as Allah ordered us.”

Mawlana Abdol-Hamid continued saying: “As the Holy Qur’an thought us, there are two kinds of people in relation with justice; prophets, saints and just people are on a high position as they believe in justice. Some other people are in lower position who have religious and ethnic visions and they are careless about justice”.

“The Noble Qur’an says to the Holy prophet: “So be patient. Indeed, the promise of Allah is truth. And let them not disquiet you who are not certain [in faith].” As well as, Allah Almighty addressed Mousa and Younus, peace be upon them, and said: “Your supplication has been answered. So remain on a right course and follow not the way of those who do not know.” We also should not follow fanatics who have short sights,” he emphasized.

Mawlana Abdol-Hamid stated that officials should not provide opportunities to fanatics because this is in contrary to the benefits of state and nation and it will never be succeeded.

Mawlana Abdol-Hamid said that the lower managers of country should obey senior officials.

“Obeying fanatics and narrow-minded elements will destroy the country,” he said.

The grand leader of Sunnis in Iran said: “As a prayer Imam, I believe that there is no difference between Shias and Sunnis for me. I believe the followers of all faiths and minorities should achieve their due rights around the world.”

He said: “Some classes of people complain that appointments for governmental posts are not according to meritocracy. The officials should play a role based on meritocracy.”

Mawlana Abdol-Hamid said that tasks and posts should be distributed according to capabilities and talents not religious affinity.

Preaching makes nations beloved & respectable
In another part of his speech, Mawlana Abdol-Hamid stated that “carrying out the duty of enjoining good and forbidding evil” brings dignity and popularity for Muslims and neglecting this duty brings humiliation.

Shaikh-ul-Islam recited the Noble verse of the Qur’an: كُنْتُمْ خَيْرَ أُمَّةٍ أُخْرِجَتْ لِلنَّاسِ تَأْمُرُونَ بِالْمَعْرُوفِ وَتَنْهَوْنَ عَنِ الْمُنْكَرِ وَتُؤْمِنُونَ بِاللَّهِ ; You are the best nation produced [as an example] for mankind. You enjoin what is right and forbid what is wrong and believe in Allah.

He said: “The act of enjoining what is right and forbidding what is wrong is one of the basic principles of divine religions. Whenever Muslims acted upon this duty, they gained dignity and Allah made us beloved and successful. When they refused doing so, they faced failures and the enemies defeated them.”

He stated that we have a responsibility to convey the message of Islam to others and to preach the teachings of the last divine religion by our acts.