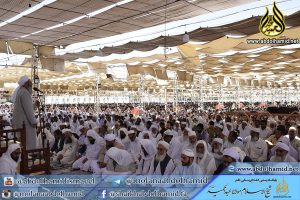 Friday Imam of Sunnis in Zahedan said on July 12, 2019 that acting upon Shari’ah lightens individuals and societies as “misdeeds” cause darkness in hearts and societies.

The official website of Shaikh Abdol-Hamid quoted him saying: “Acting on the Sunnah of the prophet, peace be upon him, divine orders and all good acts illuminate human beings. Rasoulullah PBUH used to make du’a for light in his heart, tongue, ear, eye and all sides.”

He said: “As acting upon Shari’ah makes human life enlightened, sins make body and society dark. Each sin, small or big, begets a black spot in heart; if the person does not repent instantly, black spots will occupy his/her whole heart.”

“There are sins which remove the light of Deen. How often we consider a sin “small”, while it is a very big sin before Allah. The Almighty says in the Qur’an” “ذْ تَلَقَّوْنَهُ بِأَلْسِنَتِكُمْ وَتَقُولُونَ بِأَفْوَاهِكُم مَّا لَيْسَ لَكُم بِهِ عِلْمٌ وَتَحْسَبُونَهُ هَيِّنًا وَهُوَ عِندَ اللَّـهِ عَظِيمٌ; (Just think how erroneous you were,) when you passed this lie on from one tongue to the other and uttered with your mouths that of which you had no knowledge. You took it as a trifling matter whereas it was a grave offence in the sight of Allah”, Shaikh Abdol-Hamid pointed out.

President of Darululoom Zahedan said: “Everybody should repent, seek forgiveness and carry out good acts and worships as much as the light of worships enters in his/her each and every part of body. Truancy makes body dark.”

“Take care of youth and protect them from going to dark fields. Control your tongue and avoid from useless talks, instead build your endless life. We should strongly avoid from misdeeds and sins, because Satan and the soul work hard to remove spiritual light from our schools and universities and society,” Mawlana Abdol-Hamid said.

He pointed out to Hajj as a big worship that illuminates human life and said: “Hajj is one of the important pillars of Islam that builds individuals, society and guides people. It is devotion of wealth and body. Hajj makes hearts and human life full of light.”

In another part of his speech, the most outstanding Iranian Sunni leader strongly denounced Chinese government over torturing and crimes against Chinese Muslim minority and asked Iran and other Muslim states to decry this crime unanimously.

He termed Chinese government’s acts against the Muslim minority a “frightful crime” and said: “The government of China commits very savage cruelties and frightful crimes against Muslims in Xinjiang where mainly Muslims live.”

“Apart from oppression and tortures against Muslims like forbidding them from offering prayers and observing fast, according to news reports they separate Muslim children from their families and hold them in internment camps in order to change their faith and religion,” he added more.

Khateeb of Sunnis in Zahedan underlined: “It seems the Chinese statesmen and officials, despite developments in industry and economy, are highly backward morally, culturally and humanly.”

“Chinese officials think they are still in the Middle Ages and people cannot get informed about their crimes against Muslims. It is a shame for the Chinese leaders and statesmen as they deny religious freedom human rights of a nation due to their narrow-mindness and barbarism. It takes place in a world which proclaims of civilization and progress; dictatorship and tyranny have been a big defect and abominable,” President of Darululoom Zahedan said.

He further said: “The countries which violate human rights suffer from barbarity. Those who respect human rights know that no one should be under pressure due to differences in faith, religion, culture and political views.”

The most influential Iranian Sunni leader criticized Muslim countries and said: “While 22 big countries of the world issue statement and decry China over violation of human rights, silence of Muslim countries is a very bad and deplorable issue.”

“I’d like to ask respectable president and the government of the Islamic Republic of Iran from this podium to denounce China over oppression and racial segregation of Chinese Muslims. They should demand from China to put an end to oppression and torture of Muslims in that country,” he said clearly.

Khateeb of Sunnis went on to say more: “China has economic interests in many Muslim countries, including Iran; as if they create obstacles on the way of these interests, Chinese will endure a big economic damage. It’s a question why China ignores its interests in the Muslim countries and oppresses Chinese Muslims?”

He concluded his points by saying: “The Persian Gulf states and Pakistan, Afghanistan and the rest of Muslim states should stand against Chinese aggression and crimes and decry it unanimously.”

Avoid from targeting peace in the province

In the last part of his speech Shaikh Abdol-Hamid urged on “maintaining peace” and said: “Recently some reports issued that some unknown people call police and when policemen present on the spot, a sonic boom surprises them. Although such explosions have no serious damages, but it is a discreditable act which sabotages peace and fame of our province.”

“There is no benefit for people in such childish acts, rather they bring damages about for the province. People have some problems and pains which should be resolved by legal channels. Peace and law and order are very important for us,” he said.