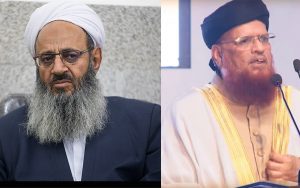 Addressing the former judge of Federal Shariat Court of Pakistan, Maulana Abdol-Hamid said: “As we learnt that some sinister terrorists tried to assassinate you, this painful news shocked me and other scholars, students and Muslims here in Iran.”

“When we were informed that you and your family had survived the cowardly attack, we thanked the Almighty instantly and kept praying to Allah for increasing the positions of the martyred guards and your safety,” he added more in his letter.

President of Darululoom Zahedan said in his statement as well as the letter that Mufti Mohammad Taqi Usmani was not limited to Pakistan and different educational and scientific centers benefit from the works and books of him and therefore this painful incident made Muslims over the world anxious and worried.

Shaikh Abdol-Hamid asked the government of Pakistan and security officials to identify terrorist groups and uproot them who kill Ulama one after the other one.