“Narrow-mindness” Should be Removed from Country 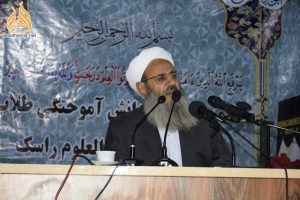 The official website of Shaikh Abdol-Hamid reported that On Sunday 17th March, 2019, he talked with the attendees of the ninth graduation ceremony of Farouqia seminary and Ayesha Seddiqah school of women in Nikshahr. In this speech, he urged on removing narrow-mindness by anyone in the country and termed “equality” and “national and Islamic views” necessary for protecting unity and peace.

“We oppose fanatics of the both communities; Shia and Sunni ones. Iranian Sunnis want respect of their country and they maintain unity and peace, but they will never compromise on their due rights,” president of Darululoom Zahedan added more.

He further said: “The constitution ensures Sunnis’ rights and it only forbids them from the post of presidency. We think the constitution is not any divine text which cannot be modified and changed. There are articles and laws which should be changed as they could not respond.”

“Sunni Muslims of Iran should enjoy full freedom; as they have freedom in Sistan-Balochistan, the same freedom should be in Tehran, Mashhad, Esfahan and other metropolises where Sunnis are in minority. We do not accept difference between Shias and Sunnis and we do not tolerate narrow-mindness and extremism by any side,” Mawlana Abdol-Hamid underlined.

Be voice of local people
Next day, March 18, Shaikh Abdol-Hamid took part in the graduation ceremony of Miftah-ul-Uloom seminary of Raask city. He alluded to severe financial problems of people and called on local officials to convey the voice of voiceless local people to higher officials in the capital of the province and country.

“I’d like to call on security officials to order their forces to show strong precaution in order to avoid from shooting innocent citizens. Killing innocent people is forbidden legally and religiously as well as such incidents will be pretexts and excuses for enemies,” he said.

Khateeb of Sunnis urged on the importance of unity and said: “Civil wars damage badly any country as the conditions of Syria, Yemen and Iraq and some other Muslim countries prove the subject.”

In another ceremony held in Pashamag village, Shaikh Abdol-Hamid said: “We recommend people to be united and maintain peace and durability, in the same time we follow the case of our due rights by peaceful and legal channels. No one should expect that we remain silent about our legal rights.”

He once again urged on security forces to avoid from opening fire on jobless people who have no choice but to smuggle fuel or other goods. If a security man is martyred, it is much better than killing an innocent citizen.

Mawlana Abdol-Hamid advised people to respect travelers of different parts of the country who travel to Sistan & Balochistan in the season of new solar year.

Shia & Sunni Ulama should leave fanaticism
The most influential Iranian Sunni leader traveled to Iranshahr city on March 20, 2019 to participate in the graduation ceremony of Dar-ul-Forqan seminary of Chah-Jamal town.

He called on Shia and Sunni Ulama and said: “Leave fanaticism and bigotry and meditate how you can protect Islam. For us, Islam and humanity are important and we do not have sectarian viewpoints, we think sectarian views decrease status and stage of people.”

“Avoid from sectarian viewpoints and do not divide Muslim Ummah to Shia and Sunni. All Islamic sects are branches of the strong tree of Islam; if the tree is saved, the branches will be saved, too.”

Senior Hadith teacher of Darululoom Zahedan said: “We are not Takfiri and even we do not consider Takfiri elements “disbelievers”; we think they are Muslims but with wrong viewpoints.”

At the end of his speech in Chah-Jamal, Shaikh Abdol-Hamid said: “No one is authorized legally to forbid anyone from offering prayers. Rights and dignity of all Muslims in all parts of the country should be preserved as the constitution affirms.”