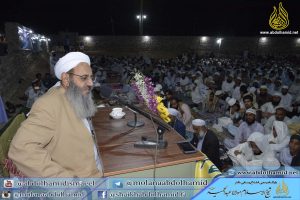 The most influential Iranian Sunni scholar strongly criticized the Ministry of Education on insulting Sahabah in textbooks. He was talking to a gathering in Jakigur of Sarbaz County in Iranian Balochistan on Thursday 15th Nov. 2018.

The official website of Shaikh Abdol-Hamid quoted a part of his speech in the graduation ceremony of Jakigur Islamic seminary where he said: “In the book of ‘Religion and Life’ of the secondary school Sayyidana Abu-Hurairah has been accused for telling lie. It has hurt feelings of Sunni Muslims. No one is allowed to insult Sunnis’ holy objects.”

“The Ministry of Education of is not authorized to distribute and teach textbooks which include insults about the sanctities of the Sunni community. Insulting other’s sanctities is not allowed in any religion.” He added more.

President and Grand Hadith teacher of Darululoom Zahedan further said: “Sayyidana Abu-Hurairah is a great companion of the prophet Mohammad, peace be upon him, and according to Ahl-us-Sunnah all companions of the prophet are just, credible and accepted.”

Alluding to the virtues of Abu-Hurairah, he said: “Other companions were busy with trading and business while Abu-Hurairah was accompanying the prophet PBUH day and night to learn more and memorize more Hadiths.”

“Unlike what has come in some books, Abu-Hurairah was a Hafiz of Hadith as well as Faqih and expert in jurisprudence. So insulting such great people cannot be tolerated,” he underlined.

The eminent Islamic scholar said: “There has not been any teacher and mentor in the world during history who could bring up students like the last messenger of Allah. Even Imam Abu-Hanifah and other imams could not train such great students.”