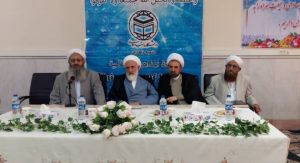 Talking to the audience of the valediction-introduction ceremony of the University of Islamic Denominations’ principals in Zahedan branch, Shaikh Abdol-Hamid said all developments of human beings had been the results of science and knowledge.

President of Darululoom Zahedan said in his speech on Thursday 18th Oct. 2018: “We are happy with the initiation of a branch of the University of Islamic Denominations in Zahedan city. We hope this university may advance and work hard with farsightedness becoming a big center in the region.”

“There were many students from Afghanistan and Tajikistan in Darululoom Makki Zahedan and now some of them have occupied good positions in their countries. There has not been any report that even one of our graduates in those countries had joined extremist groups,” chairman of the Coordination Council of Sunni Seminaries in Sistan-Baluchistan underlined.

He added more: “Officials in Tajikistan and Afghanistan confess that their citizens who study at Darululoom Zahedan avoid extremism and act soberly. They have a good viewpoint about Muslim denominations and other social issues.”

“If we do not accept these students, they may go somewhere and grow up with extremism creating problems for their societies. But certainly there is no any extremism in our seminaries. The security officials and representative of the supreme leader accept this fact and they have a watch on our schools,” the most influential Iranian Sunni scholar said.

It is noteworthy the new principal of the state-run University of Islamic Denominations belongs to the Baloch Sunni community of Iran.