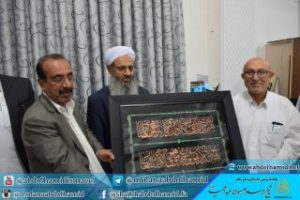 A group of Baloch political, social and academic activists of Iranian Balochistan glorified Shaikh-ul-Islam Mawlana Abdol-Hamid on his struggles in different areas.

The website of the office of Shaikh Abdol-Hamid reported that the Baloch activists had met the most influential Iranian Sunni leader in the Grand Makki Masjid where he has been stayed for ‘etikaf.

Dozens of activists expressed their appreciation on the stances of Shaikh Abdol-Hamid in the recent presidential election as he could unite Sunnis of Iran.

According to Sunni sources, more than 7 million Iranian Sunni voters supported Rouhani who has been re-elected by about 24 million votes in the election of 2017.

Dr. Azizullah Mojahed, a professor at Sistan-Balochistan University read the text of the appreciation plaque before Shaikh Abdol-Hamid.
Dr. Mohammad Areesh and Dr. Rahbar Rahimi, two Baloch professors and academics presented the plaque of appreciation to the rector of Darululoom Zahedan.

In a brief talk, Mawlana Abdol-Hamid thanked the political and social activists and leaders. He termed “harmony and coordination” of the Sunni community in the presidential election a “divine success” and “people’s discretion and efforts”.

“The unanimous presence of Sunnis in the recent election increased their respect and popularity in the country. Now it has been clear for people that if the Sunni community supports any candidate, he will have more chances of winning,” he added more.

Khateeb and Friday imam of Sunnis pointed: “The officials now well that the Iranian Sunni community wants its due rights and demands; focusing on the principle of ‘meritocracy’ and ‘nationality’ in employments.

Alluding to the ‘most important message’ of the recent election in Iran, he said: “It has been now clear for all political parties and wings that the policy of pressure and short-mindness is not responsible in the society. Rather they should have a review in some of their stances and policies.”

Concluding his points, Shaikh Abdol-Hamid pointed out to the newly elected city council of Zahedan and said: “We worked hard to see a professional and experienced council in the city. By the praise of Allah, our society can tolerate different sects and communities to have a developed province.”