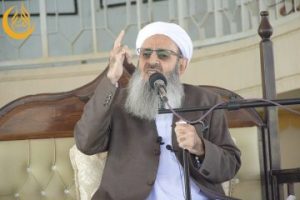 Shaikh Abdol-Hamid called on the Iranian high-ranking officials to bring fundamental changes in country’s policies and listen to the critics. He said: “No one is above the law. Everyone must be accountable to the law and all must accept criticisms as the policies of the last 43 years have reached to a dead end; otherwise tyranny will spread everywhere.”

Talking to tens of thousands of worshipers in Zahedan’s biggest Friday gathering on November 25, 2022, the most influential Iranian Sunni leader said: “Unfortunately, Iranians are sanctimonious. Throughout history, no one was allowed to criticize the top Iranian rulers, and they all were in circles, and common people could not talk to them. In the past regime, the critics used to praise the king first, then to criticize lower officials. While Sayyidana Ali, may Allah be pleased with him, although was higher than everyone lived with people.”

“Tyranny will spread if authorities do not listen to the people and ban criticism. I am sorry that some people believe that some specific authorities should not be criticized at all. Officials are responsible. Their performance must be in accordance with the divine law and the law of the country. All are equal before the law. No one is above the law. If the officials accepted the criticisms in the past, our situation would not be like this today. If there is no criticism, there will be no reformation. If the system and the officials are not criticized, tyranny will arise. If the critics were heard, the country’s condition would not be like this,” said the president of Darululoom Zahedan.

Shaikh Abdol-Hamid insisted: “An Islamic system must be on the path of Islam, and Islam is a sort of democracy. Even we believe that in many cases, Islam has given more freedom than democracy.”

“Officials should be among the people. The holy Prophet, peace be upon him, the Rashidin Caliphs and Sayyidana Ali, may Allah be pleased with them, were among the people. They used to listen to critics. In Iran, unfortunately, some officials did not listen to critics and sympathizers in recent years. If they had listened to the people, the country would not have faced such a situation today,” said Imam of the Grand Makki mosque of Zahedan.

“Once Shaikh Abdol-Aziz (founder of Darululoom Zahedan) got out a letter from his pocket prayers; the letter was full of criticism and even insult against him. After reading the letter, Mawlana Abdol-Aziz said: Those who want to correct their mistakes should listen to the enemies, because friends never see any fault in us,” said the Friday prayer of Sunnis in Zahedan.

“If there were reforms, we would have fewer problems today. We missed the opportunity and did not hear from sympathizers and critics. Many people do not know that people are under severe economic pressures and endure hardships. The Iranian currency has lost its value and people cannot afford to buy their necessities; these problems should be solved soon,” said the eminent Iranian Sunni scholar.

The protesters are neither Israelis nor Americans
Shaikh Abdol-Hamid criticized the country’s old ineffective policies and urged on treating people well. He said: “People are shouting that the country cannot be run with these policies. Killing and imprisoning is not the solution. These people are neither Israelis nor Americans, but Iranians. It is true that we have enemies, and they provoke, but in fact, we have many problems. Solve the problems.”

Regarding the resolution of the UN Human Rights Council against Iran, the Iranian top Sunni cleric stated: “The fact is that there are weaknesses and the state must correct them. Of course, the enemies highlight the weaknesses, but you must correct them. As a well-wisher, I would like to say: as Muslims, we have obligations towards the people and the country. Islam has given us responsibility. We call on all state officials to take wise measures in resolving the country’s all problems.”

“Territorial integrity and security of Iran is vital and important for us. Peaceful protests are people’s right. Imprisoning the protesters is not the solution,” he underlined.

The Kurdish people protect borders; do not shoot them!
Referring to the increase of violent behavior against Kurdish protesters, the most influential Iranian Sunni leader said: “Our Kurdish brothers and sisters are among the best Iranians. Iranian ethnicities are like a rainbow. The Kurds have maintained the borders’ security, just as the people of Baluchistan did. Our Kurdish brothers and sisters have protected several borders and endured hardships. They should not be treated harshly. The demands and problems of Kurdish people should be taken into consideration. The holy Qur’an has ordered to treat people in the best way.”

“Some of the popular Kurdish scholars, including one of their prominent scholars (Mamousta Khezrnejad) are in prison; release all of them,” he underlined.

Iran’s wealth should not be spent abroad
Shaikh Abdol-Hamid said: “We do not want to subvert, but reform is not possible without criticism. We live in this country and this country belongs to all of us. Iran does not belong only to officials, security personnel or specific people. We all want this land to be prosperous and safe, and its wealth not to be spent elsewhere.”

“A lamp that is needed for a house is not permissible for a mosque. We believe in freedom of thought, expression, faith, and speech. Capable and competent people should run the affairs of the country without any consideration,” he said in his last points.