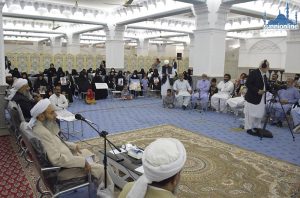 In a meeting with the families of Zahedan’s bloody Friday martyrs, the most influential Iranian Sunni leader considered discrimination as one of the main causes of such crimes.

Shaikh Abdol-Hamid emphasized on legal trial and punishment of the murderers and perpetrators, and the officials who were behind the sense.

In this meeting, while offering his deepest condolences to the survivors and families of the martyrs of Zahedan’s Bloody Friday, the president of Darululoom Zahedan stated: “There is no doubt that those who lost their lives on Bloody Friday are considered as martyrs. This brutal incident made their families sad. May Allah remove the sadness from their hearts and grant them a special reward and mercy. Today, the people of Iran, free nations and justice-seekers from all over the world sympathize with the families of the martyrs of Zahedan and Balochistan.”

He urged that the martyrs of Zahedan and Khash had been killed unjustly.

“The protesters of Zahedan and Khash were killed unjustly. Provincial and national officials have acknowledged it. All the martyrs were oppressed and innocent. We will not be satisfied until the officials condemn these crimes, condole with martyrs’ families and punish the perpetrators and the killers,” said the eminent Iranian Sunni scholar.

“To prevent such crimes, the murderers should be retaliated and punished. I assure the families of the martyrs and the injured that we will follow up the case,” Shaikh Abdol-Hamid underlined.

The Friday prayer leader of Sunnis in Zahedan considered the discrimination, injustice, and inequality as factors of such treatments with the people of Balochistan.

“The incident of Bloody Friday in Zahedan had many benefits. It created a great awakening in the society, brought the people together, and united them,” he believed.

In this meeting, a statement was read by a member of the martyrs’ families. She said that they always curse the ruthless murderers of their dears and just want punishment of them.

The families of the martyrs thanked Shaikh Abdol-Hamid and his staff for following up the case.

A group of family members of the martyrs talked to the audience and urged on refusing to accept blood money. They demanded punishment and trial of the killers.