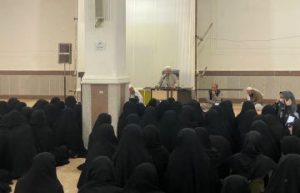 The most influential Iranian Sunni leader has met with female students of different universities of Zahedan at the Ayishah female seminary affiliated to Darululoom Zahedan.

Shaikh Abdol-Hamid emphasized on women rights and criticized the Iranian authorities for not observing these rights during forty-three years since the victory of the Islamic revolution.

He pointed to the position of women in Islam and said: “In pre-Islamic ignorance, women were oppressed, but with the advent of Islam, these oppressions and inequalities have ended. Allah has given some women abilities and talents that have not given to many men. During the time of the holy prophet, peace be upon him, women were present in many scenes and even on the battlefields, behind the sense of the battle to treat the wounded and prepare supplies. They encouraged their husbands and children to be on the front line of the war. As men, women were involved in spreading Islam and serving the religion. They have endured tortures, hardships of migration, and so many difficulties.”

The top Iranian Sunni cleric considered the hatred of religion in Iran as the result of the performance of incompetent authorities and said: “If the Seerah, justice and fairness of the holy Prophet PBUH and the Righteous Caliphs were implemented today, the world would be affected by our actions and no one would be dissatisfied.”

Shaikh Abdol-Hamid continued: “Unfortunately, during forty-three years of the Islamic revolution, women, tribes, Islamic sects, and religious minorities have faced discrimination and inequality. Why should women, who make up the majority of society, suffer from discrimination?” the president of Darululoom Zahedan expressed his concerns.

He stressed the need to employ women in the administrative posts and noted: “We cannot build the country and society without women. When a woman has the ability to work as a manager and higher official, and has skills and knowledge, why should she be deprived of activities in the society? When women are in offices, what obstacles prevent them from the posts of ministers?”

Mawlana Abdol-Hamid pointed to the current demonstrations and protests in Iran and said: “The recent [anti-government] protests in the country, which were mostly carried out by women, are because of women’s dissatisfaction with the authorities. They have been facing discrimination, inequality, and harsh behaviors. If women were not humiliated and had freedom and their due rights were respected, there would be no need for compulsory hijab and moral police, but they themselves would observe Islamic rules of laws and hijab code.”

“All Iranians, including women, religious and ethnic communities, and political parties should have equal rights and opportunities,” Shaikh Abdol-Hamid urged among the female students of the universities located in Zahedan, the capital of Sistan-Balochistan in the southeast of Iran.

At least two representatives of the female students spoke to the audience before the speech of Shaikh Abdol-Hamid who expressed their support for him in his stances on national and local issues.