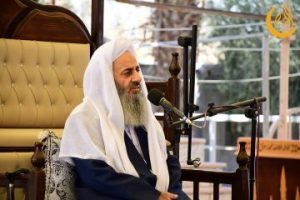 Emphasizing the need to punish the perpetrators of Zahedan’s bloody incident, the most influential Iranian Sunni leader called on all state officials not to run away from their responsibility and condemn this brutal attack.

Talking to the people of Zahedan before the Friday prayers on Oct 21, 2022, Shaikh Abdol-Hamid called the Zahedan massacre “unprecedented” in its kind and stated: “What happened in Zahedan recently was a bitter and heartbreaking incident. An incident that was unprecedented in Iran. We wonder why the high-ranking officials are silent in this regard. In this musalla and street, dozens of people were killed without any reason. Many of them were shot in the head and heart.”

He questioned: “Who killed them and what was their crime?”

“The high state officials, and the leadership of the Islamic Republic of Iran are responsible for the incident of Zahedan; no one can run away from this responsibility,” said Shaikh Abdol-Hamid in the presence of tens of thousands of worshippers in Zahedan’s Grand Musalla.

The president of Darululoom Zahedan continued: “I cannot mention the exact number of those who were killed; up to 90 people have been announced. Many are injured and paralyzed. Some had their hands and feet amputated, and some had their spinal cords severed.”

Shaikh Abdol-Hamid rejected any claims that Sunni worshippers were armed in the Friday incident, saying: “Some claim that the protesters had attacked them with weapons. If that these people carried out weapons with them, then you have to prove that how many people have been killed from your side? While we lost so many people, you have not lost even one soldier. Actually, those who committed this crime try to attribute the incident to separatists and militant groups and blame the innocent people who have been killed, and injured with no reason.”

“Why are you telling these lies? The more you lie, the more people and Allah Almighty get angry with you. Why did you shoot at people at a place of worship for two hours? The number of people killed in this incident in just two hours was more than the total number of people killed in the last four weeks of nationwide protests in Iran,” said the eminent Iranian Sunni scholar.

“Those who ordered the troops to kill people should be arrested. The officials who failed in this process should be held accountable.”

Mawlana Abdol-Hamid explained the measures that have been taking in this regard, saying: “We have been waiting for a convenient answer. The Minister of Interior and the representatives of the National Security Commission of the Parliament have come here, (in Zahedan) even though the truth has been proven to the authorities that people were killed unjustly, but the authorities have not yet been informed us of the result.”

“We want fair and just treatment with the criminals of the incident. The shooters and those who ordered must be arrested and punished as soon as possible. We have always been fair, and we still consider fairness our duty. The perpetrators of the incident and the officers who committed these murders should have been in prison; it would heal the wounds of the people. By giving money to people and saying martyrs to dead, people will not be satisfied,” the most influential Iranian Sunni political leader said.

People voted for you, but you have not supported them!
Shaikh Abdol-Hamid thanked those who had expressed sympathy with the people of Zahedan in the Bloody Friday incident. He complained about those Iranians who remained silent in this case and said: “We are complaining about the Iranians who have been silent in this incident, especially those who had responsibility in the previous governments, ruled for several years, and got votes from our people. We also complain about the Shia clerics who remained silent in the incident.”

The Friday Imam of Zahedan went on to say: “Anyway, as Iranians, we all have fought to defend the territorial integrity of our country. The eastern and southeastern borders have been protected by the people of frontiers. These people have kept the borders safe and maintained the security in the entire region.”

“We are all Iranians and members of one body. We expected those who got vote from our people in the past, would at least condemn this crime,” he expressed his views.

President of Darululoom Zahedan criticized the president Raisi’s administration and said: “We have complaints from the current president. Mr. President! Our people voted for you in the most difficult circumstance when the election was boycotted by others. You got the votes of the people and did not answer their demands. In this incident, you did not even console them.”

Shaikh Abdol-Hamid thanked the people of Zahedan for maintaining the security of the region.

We have been suffering from discrimination for 43 years
Shaikh Abdol-Hamid considered the sovereignty as a divine test and said: “Those who were in prison in the past and then Allah gave them power, they should know that these blessings were given to them by Almighty Allah. All governments in the world must serve their people and listen to their demands, implement justice and fairness, and open the door of criticism to all.”

“For 43 years, ethnic and religious groups have been suffering from discrimination and inequality. We have been raising our demands to the officials. Many letters have been written to the supreme leader, but unfortunately we have not yet been met our demands,” said the Friday Imam of Zahedan.

The most influential Iranian Sunni leader considered the recent nationwide protests in Iran as the result of unaddressed demands and stated: “If these issues were addressed in the past, the situation would not have been as it is today. People should be given the opportunity to speak openly and raise their problems; they should not be considered as enemies. Listening to people and fulfilling their legitimate demands is the best solution. Hitting and killing people are not the solution. We are all Iranians; we must tolerate each other.”

“Ethnic and religious communities were in the armed forces in the previous regime, and now they are deprived of their basic rights. We have told the authorities: give us opportunities to serve our country and defend the territorial integrity of Iran, but they did not listen to us. If this had happened, we would not see such a tragedy today,” Shaikh Abdol-Hamid concluded his points.