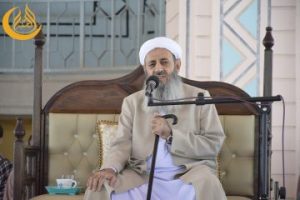 Condemning strongly the crime of the Bloody Friday incident in Zahedan, the most influential Iranian Sunni leader called on the officials for an impartial, fair and accurate investigation of the incident and emphasized on legal punishment of all the perpetrators behind the incident.

Talking to tens of thousands of people in Zahedan’s biggest Friday gathering on Oct. 7, 2022, Shaikh Abdol-Hamid said: “Last Friday, people came to Musalla to offer the Friday prayers; no one imagined what would take place on that Friday. The Friday prayer ceremony was held peacefully, and the worshipers were engaged in Sunnah prayers inside the worship place. Just a very small number of youths chanted slogans, and then went to the police station near Musalla and threw stones at the police station. Meanwhile, the security forces shot the protestors and the people inside the Musalla and those who were returning to their homes.”

“What happened last Friday in Zahedan’s Musalla was very shocking and unfortunate. People and worshipers were shocked that from where and for what reason they were shot. In that incident, many people were martyred and injured. What is worrying is that the majority of martyrs and injured were targeted from the head and heart, while this is against the customs and laws of the world,” said the Friday prayer leader of Sunnis in Zahedan.

President of Darululoom Zahedan continued: “Usually, tools like tear gas and plastic bullets are used to quell protests, not war bullets, and machine guns. I am surprised! Are those who targeted these people were really Iranians and our compatriots? We have Islamic, Iranian brotherhood and kinship with each other. Did those who commit such a horrible crime consider us as brothers?!”

He described the bloody incident of Zahedan a ‘big crime’ and strongly denounced it, saying: “We strongly condemn this inhumane crime and demand that justice must be implemented in this regard. We are not satisfied with just declaring the dead as martyrs by the officials, because the Qur’an and Hadith have already called them martyrs, but what we demand is fairness and justice that should be implemented.”

“Scholars, tribal elders, trustees and masses ask the authorities to clarify the truth in an impartial and accurate way, condemn the crime, and announce that these people were killed unjustly,” he added.

“People want the authorities to prosecute the attackers and deal with those who ordered to shoot the people. Officials must do this, so that the security will establish in the city and across the province in the future. The government has a responsibility to ensure the safety of people’s lives, property, and dignity. The Officials must enforce the law against those who broke the law and committed injustice,” said the Iranian Sunnis’ leader.

Mawlana Abdol-Hamid said: “I explained what exactly had happened in Zahedan last Friday to the Minister of the Interior, to the National Security Commission of the Parliament, and to the MPs elected from the province and emphasized that a fair investigation of the incident, proving that people were oppressed and punishing the perpetrators of the crime were among the basic demands of the people”.

“The human and financial damages must be paid by the government, and those who were arrested must be released soon. We just demand the truth to be disclosed and clarified,” he underlined.

Thanks for expressing sympathy with us
We strongly complain the provincial state TV and national media
The most eminent Iranian Baloch scholar continued his speech and said: “I thank all the people of Iran, including ethnicities and different factions, and the people of other countries who expressed sympathy with our people. We also thank media outlets that impartially and honestly gave coverage to Zahedan’s bloody Friday incident. We strongly complain about the provincial TV and national media. It is really a pity that we call this media a national media.”

“Many tried to attribute the incident to militant groups and to separatists, but everyone should know that the truth will never be hidden, and the sun will not stay behind the clouds forever. I dare to say that in this incident both the reality of the incident and the oppression of our people have become clear to the authorities and to other people. In fact, this incident awakened our people. Our people knew that they should demand their rights openly without any considerations,” Mawlana Abdol-Hamid noted.

People should pursue their due rights and maintain the security
Imam of the Grand Makki Mosque of Zahedan stressed on the necessity of maintaining security and pursuing the incident through legal means and said: “According to the information we have about the conditions of the city and the province, and as we have friends and foes, we emphasize on maintaining security and brotherhood and on protecting people’s lives and properties.”

“We have advised everyone to keep calm and control their emotions so that those who created this incident could not change the subject to save themselves,” he said.

Shaikh Abdol-Hamid continued: “The province of Sistan-Baluchistan has its own special conditions. I advise the people of the province to maintain the security all across the province so that the rights of the martyrs, the injured, and those who lost their properties in this incident could be ensured; otherwise they may lose their rights.”

“The recent insecurities caused lots of financial damage to the people and the treasury. Unidentified people set many shops and shopping malls on fire. The authorities should take care of this issue,” he added more.

“In Muslla of Zahedan, divisive and sectarian words have never been said to create problems, but people’s problems and demands have been raised from here with giving right solutions. If officials fulfilled these demands, today they would not have faced such problems in the country”, said the Friday Imam of Zahedan.

“Our scholars, trustees, tribal elders, intellectuals and thinkers believe in one Ummah and believe that all Muslims in the world should be united. We have national solidarity with all Iranians,” he believed.

No state can survive with oppression
Mawlana Abdol-Hamid called on the state officials on implementation of justice and said: “Governing the country is only possible by enforcing justice. Oppression is not stable and destroys the foundations. In the 1979 revolution, scholars used to say: ‘The country will remain with infidelity, but not with oppression.’ Therefore, anyone who commits injustice in any dress and in any name – Islam or non-Islam – is unstable; only justice and fairness remain stable.”

It should be said that before the Friday prayers, after reciting Surah Al-Fatiha and Surah al-Ikhlas, Shaikh Abdol-Hamid prayed for the martyrs of the Friday incident of Sep 30 and for martyrs of 1993 of the Grand Makki Mosque of Zahedan who lost their lives in direct shootings of the security forces.