Iranian Sunni leader explains what happened in the bloody Friday of Zahedan: 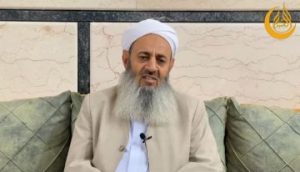 In a video message, Shaikh Abdol-Hamid explained the details of the bloody Friday of Zahedan where dozens of Sunni worshipers lost their lives after offering prayers on Sep. 30, 2022.

He said: “Some do not know the details of the bloody incident which took place in Zahedan on Friday. Rumors and fake news have been reported and published in this regard by some media outlets and news agencies. Some want to hide the truth of the incident by releasing false news.”

“In order to reveal the truth to all, I want to speak as openly as I could and tell what happened in Zahedan on Friday so that no one’s rights are lost. On that Friday, I spoke about the current crisis in Iran (before the Friday prayers) and advised both the state officials and the people to be just and take care of moderation and avoid any kind of violence and tension against each other,” he added more.

Before the Friday prayers, Iran’s Sunni leader supported the peaceful protests in Iran, advising the officials not to kill the demonstrators, and allowing them to raise their voices and have their sayings. In his Friday sermons, Shaikh Abdol-Hamid alluded to the rape case of Chabahar and called on people of the province to keep calm and control their emotions until the officials announce the result.

In his message, the most influential Iranian Sunni scholar explained the Friday incident of Zahedan: “Just after the Friday prayers, while people were busy offering Sunnah prayers and worshipping, gunshots were heard. Then it became clear that after the prayers, some youth gathered in front of the police station, which is in front of the Musalla. They chanted slogans and some of them threw stones at the police station.”

Worshipers martyred inside Musalla
According to the reports we have received, the forces of the special unit, who were already stationed at the base, started direct shot at the worshipers. Not only they shot the protesters, but they also shot the worshipers inside the Musalla from the roof of some buildings. They threw tear gas at the men and women and fired bullets as one female worshiper was martyred too.”

“They did so, while no one of the people inside the mosque had chanted any slogan. Only a small group of young people had gathered in front of the police station and chanted. Later, armed people dressed in local cloths who were stationed on the roofs of the houses, targeted the people who were returning to their homes. It should be mentioned that the most of these shots were fired at the heads and hearts of the worshipers; this shows that such an action was carried out by snipers,” the Friday Imam of Sunnis urged.

Mawlana Abdol-Hamid considered this incident as a great tragedy and said: “Unfortunately, a great tragedy took place on the Friday. It was a great cruelty that was unprecedented in its kind. They shot unarmed and defenseless people who had made ablution and had gone to Musalla only to perform the Friday prayers.”

President of Darululoom Zahedan questioned: “Why did the police forces not use facilities such as tear gas, plastic bullets, etc. to prevent from such tragedies?”

Don’t blame others
Mawlana Abdol-Hamid said: “These people must not have been treated in such a way that dozens of them were killed and injured just in a few hours. This was not the right of the people, and it is against the Islamic and the country’s laws. Some officials want to blame other people by changing the scene, while there are clear and obvious evidences that the military forces commit such an injustice.”

“The blood of these people should not be wasted. Therefore, we request the authorities to follow this issue seriously. We want justice. I convey the voice of the oppressed people to the authorities: those who killed our people unjustly should be brought to the court and must be punished,” said the Iranian Baloch political leader.

“For forty-three years, we have been saying that Sunnis should be employed in the military and police forces; if there were Sunni personnel in the security forces and police, we may not have witnessed such a great loss,” he concluded his points.

About 50 martyred citizens have been identified by the office of Shaikh Abdol-Hamid who lost their lives on the bloody Friday of Zahedan.