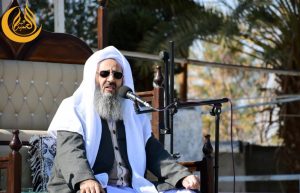 Referring to the increase of severe religious pressures and the imposition of restrictions against the Sunnis of Iran, while criticizing such treatments, the most influential Iranian Sunni leader called on the officials and ‘power-holders’ to not violate Iranian Sunnis’ freedom and due rights.

Talking to the Sunni worshipers of Zahedan, capital city of the Sistan-Balochistan province, on Sep. 2, 2022, Shaikh Abdol-Hamid strongly criticized the new obstacles and barriers against the Sunni community of Iran, saying: “We should treat all equally and tolerate each other. We must avoid extremism. Our country consists of various ethnicities and religious sects; so we must consider these diversities.”

“Our Shiite brothers, especially those who are in charge of people’s affairs and hold power, should behave in a way that respects the rights of all, including the rights of Christians, Jews, Dervishes, etc. Iran belongs to all Iranians,” he urged.

“The Sunnis constitute a large population in Iran; we don’t say that Sunnis are a minority in Iran. They are at least 20 million people. Their rights must be given, their capable people should be employed in high-ranking positions, and the legal and Islamic rights of them should be maintained and ensured,” said the Friday prayer leader of Sunnis in Zahedan in the presence of tens of thousands of worshippers.

“We are afraid if extremism penetrates into the body of the state-run bureaus, because extremism in the administration body affects unity,” Shaikh Abdol-Hamid warned the Iranian authorities.

He continued his speech, saying: “We warn the high-ranking officials not to violate our due rights that law has given us. If discrimination causes someone to take away our freedoms, this will be very dangerous.”

The president of Darululoom Zahedan expressed his concerns: “Recently, some treatments have been started in the country that has worried us. Prayer-houses are under the severe pressures in different places; while no one should be worried about the prayers. A person who has a little faith tolerates the prayers. Does offering prayers harm anyone?”

“Sunnis’ prayer-houses in Mashhad, Shiraz, Tehran, and other cities are under severe pressure. From this platform, I’d like to tell the officials: stop such harsh treatments,” he added.

Mawlana Abdol-Hamid urged: “The Supreme Leader, the president and other officials should not allow some people to cause the displeasure of the Sunnis.”

“We have endured so many problems, but did not raise our voice to protest. We have accompanied the system and government through years. Now, it is not acceptable if someone does not tolerate our prayers. The government and the system of the country must protect our legal freedom. If we face more pressure, we will defend our legal freedoms,” said the Iranian Sunnis’ leader during his Friday speech of Zahedan.

We stand against those who prevent us from the prayers
Shaikh Abdol-Hamid went on to defend the rights of Iranian Sunnis, saying: “Iran is the homeland of all Iranians. All Iranians have equal rights. The only reason that Sunnis have tolerated discriminatory behaviors in the country for 44 years was to maintain the fraternity and unity.”

“As Iranian Sunni citizens, we complain that why the authorities did not engage our capable people in the top positions of the country, in administrative jobs and in the provincial centers. Why Sunnis are not present in the armed forces?” he added more.

Imam of the Grand Makki Mosque of Zahedan said: “We have been raising and following up Sunnis’ legal demands, waiting for positive responses. However, if some people want to interfere in our religious matters that are not tolerable, then we defend our rights. You must tolerate us as Iranian citizens and give us our certain rights.”

“As a well-wisher of the country and the nation, I say: this is the voice of every Iranian Sunni citizen: ‘We want freedom; the power-holders must not take away our freedom.’ We will stand until our last breath against those who want to prevent us from prayers and interfere in our educational affairs,” said the prominent Iranian Sunni leader.

Pointing out to the maximum presence of Sunnis in the country’s political scenes, the Friday Imam of Zahedan said: “When the Supreme Leader came here (in Balochistan), I told him: today we are proud because we have never created disputes in the country.”

“We interact, tolerate, and believe that all Muslims in the world should observe unity. For us, Shia and Sunni and even Muslims and non-Muslims have absolute rights, and there is no difference. We believe in humanity,” said Shaikh Abdol-Hamid.

“Sunnis are pioneers in securing security. We have cooperated in establishing the national security and unity and were present in all political scenes including in elections. Even in the recent controversial elections, when many people boycotted the elections, Sunnis participated despite severe pressures”, the most outstanding leader of Iranian Balochistan said.

They have even filtered our websites
In another part of his Friday speech of Zahedan, Mawlana Abdol-Hamid complained about the indifference of the media to the Sunni community and said: “We complain that the local and national media and our own [state-run] TV do not pay attentions to us. The media have never conveyed our words fully and correctly, and rarely attended in our ceremonies. They even filtered our two websites that we launched from the very beginning.”

“Some foreign media outlets used to quote our content sometimes, but they boycotted us after we supported the recent presidential elections,” Shaikh said more.

Officials should respond to our letters
In the last part of his speech, he said: “When we write letters and convey our demands and problems to the authorities, they should respond and don’t leave us in an undecided situation.”

“When we publish some letters, the officials complain why we publish our demands and complaints; but when we write letters, they do not respond,” Shaikh Abdol-Hamid added more.

He said: “We expect the high-ranking officials urge on the middle officers to avoid creating obstacles for the Sunnis. We should be tolerated; we have been advising the Sunnis around the world to tolerate Shias and their religious ceremonies. It is our belief, not just a temporary policy.”