‘Connecting with Allah, Spirit of all Worships’ 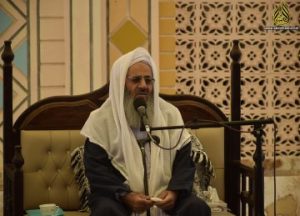 Emphasizing the importance of piety and sincerity in all types of worship, the most influential Iranian Sunni leader stressed the need to obtain the consent of Allah in all worships.

Shaikh Abdol-Hamid was talking to the people of Zahedan, capital of Iranian Balochistan before the Friday prayers on April 15, 2022. He said: “Allah Almighty wants to revive the spirit of worship in mankind through divine commands. The Almighty wants the worshiper to do everything just for His sake. If our deeds are for the sake of Allah, piety will be generated”.

The Friday Khateeb of Sunnis in Zahedan continued his Friday speech: “Mankind always needs Allah and has everything from Him. No one should consider himself needless of God. Allah wants His servants to ask Him for help in difficulties and in all situations to bring them closer to Himself. The more a servant worship Allah with sincerity the closer he/she gets to God”.

“Allah Almighty loves fasting; fasting brings sincerity and piety to a worshiper. Allah says in a Qudsi hadith: Fasting is mine and I will reward it on the Day of Judgment. Allah likes the bad smell of the fasting person (which others hate), more than the smell of perfume because fasting is for God”, said Mawlana Abdol-Hamid in Zahedan’s biggest Friday gathering.

“The soul of all deeds is in piety and fear of Allah. Alms and charity that are given for the sake of Allah, He increases them. Prayers, fasting, Zakah and Hajj should be performed only for God”, the most prominent Sunni scholar of Iran urged on sincerity in all types of worships.

He said: “Allah does not look at the appearance of our worship but at our sincerity and honesty. The more our actions are for the sake of Allah, the more valuable they are to Him.”

“Connecting with God and belonging to Him is the spirit of religion and all worships”, he believed.
Shaikh Abdol-Hamid emphasized: “We must do everything for the sake of God to get Allah’s pleasure and satisfaction in both worlds”.

The sanctity of Ramadan must be preserved
The most outstanding Iranian Sunni scholar emphasized on abandoning sins during the month of Ramadan and said: “Alas, during the month of Ramadan, which is the month of the Qur’an, mercy, forgiveness and freedom of human beings from hell, some people are lazy in observing fast and offering the five daily and Friday prayers. I wish they knew the effect and benefits of fasting on body and soul. I wish they prayed and fasted until the mercy of Almighty descended on them”.

“The month of Ramadan is sacred and the sanctity of this month must be preserved. Restaurants should not be open during Ramadan in Islamic cities but for travelers and sick citizens”, he urged.

President of Darululoom Zahedan continued: “It is a shame that some people do not leave slander, lies, drugs and drinking alcohol and committing other sins during Ramadan. Fasting and abandoning sin is the command of Allah Almighty; we must obey Allah and submit to Him”.

Shaikh-ul-Islam Mawlana Abdol-Hamid advised Muslims to increase in giving alms and charity during Ramadan and said: “Ramadan is the month of generosity. In Ramadan, Allah blesses the believers in their livelihood.”

He urged on supporting poor and needy people by saying: “Help the poor, orphans, widows, families of prisoners and the disabled during Ramadan. Take care of Imams of mosques, especially help seminaries and religious schools, which are the bases of Islam”.

Shaikh Abdol-Hamid called on the Muslims to help the biggest Islamic center of Sunni Community of Iran and said: “Help Darululoom Zahedan with financial supports that has been serving the community. It was founded by the sincere hands of Mawlana Abdol-Aziz and now it has become an international Islamic center”.

Islamic and neighboring countries should help Afghanistan eradicate narcotics
In the last part of his Friday speech of Zahedan, the most influential Iranian Sunni leader expressed his happiness with the Taliban leader’s statement banning the cultivation of narcotics and opium in Afghanistan and said: “The statement of the Islamic Emirate on the ban on narcotics cultivation was gratifying for us.”

“Drugs have always hit Afghanistan’s neighbors and have been the source of many tribal conflicts and abductions. I hope that the Afghan authorities will succeed in implementing the ban on narcotics,” he said.

“Afghanistan’s neighbors, such as Iran and Pakistan and other Islamic and non-Islamic countries can help Afghanistan succeed in its project and replace drugs with other products in order to solve the economic problems of this country”, Shaikh Abdol-Hamid concluded his points.