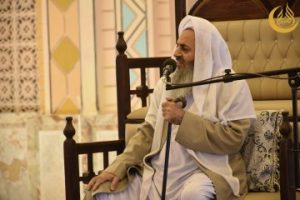 By approaching the holy month of Ramadan, the Friday prayer leader of Sunnis in Zahedan, Iran called this month as the season of worship, sympathy with needy people and spring of the Qur’an. Shaikh Abdol-Hamid stressed the need to take benefit of this golden opportunity.

Talking to tens of thousands of worshippers in Zahedan’s biggest Friday gathering on the first day of April, 2022, the most influential Iranian Sunni scholar said: “Ramadan is the season of worship, fasting and the celebration of the revelation of the Qur’an. It is the grace of Allah that He brings us to such a blessed month every year. We have to prepare for this month. We should leave unnecessary trips these days”.

“Do not pass Ramadan with sleep and neglect. Avoid all kinds of sins, protect your eyes and ears and all body parts from sins”, he added.

The authorities must keep Allah and the people satisfied
Referring to the occasion of the Islamic Republic Day (1st April), the most influential Iranian Sunni leader noted: “We hope that the officials will reconsider and change their policies. Politicians and decision-makers should make policies and decisions in a way that can satisfy God and the nation”.

“The officials should consider the dignity of the people and the nation in all affairs”, he urged.

In his final Friday remarks, president of Darululoom Zahedan forbade hoarding the things that people need them, specially hoarding food items during Ramadan.

He said that the Holy Prophet PBUH strongly forbade from hoarding and it is illegal according to the Islamic rulings.

Shaikh Abdol-Hamid expressed his regret over the death of Dr. Habibullah Malek, one of the first Iranian Baloch educated personalities who served as the first Health Director in Sistan-Balochistan shortly after the revolution and then moved to London.