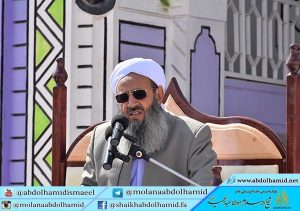 Shaikh Abdol-Hamid said in his Friday speech of September 11, 2020 that blasphemy to the Holy Prophet PBUH strengthens extremism and terrorism.

“I strongly condemn the dangerous insult of a French magazine to the beloved prophet of Islam and overlord of the entire world, Sayyidana Mohammad (peace and blessings of Allah be upon him),” the Iranian Sunnis’ leader said.

The Friday prayer leader of Sunnis in Zahedan stated: “There is no law in the world that has given human beings “absolute freedom” that some people offend and insult others under the pretext of freedom. The real freedom doesn’t allow anyone to insult humanity”.

President of Darululoom Zahedan continued: “Such a freedom in which the feelings of more than one and a half billion Muslims and other free people of the world are hurt, is not freedom and such a freedom is condemned.”
Shaikh Abdol-Hamid pointed out: “As Muslims are not allowed to insult the sanctities of any sect or religion by the order of the Holy Qur’an that has warned Muslims to not insult false idols, others should also not be allowed to insult the Holy Qur’an and the Prophet PBUH.”

“When Muslims have such a view and method, why some are allowed to insult the sanctities of Muslims in Western and European countries?” Shaikh Abdol-Hamid questioned.

The Friday Imam of Zahedan urged: “Those who insult the sanctities of religions, in fact they are supporters of the terrorism and they boost extremism in the world.”

“Insulting the sanctities is a kind of terrorism and it is in contrary to the security and peace of the world and the countries in which these insults take place”, the outstanding scholar of Sunnis in Iran said.