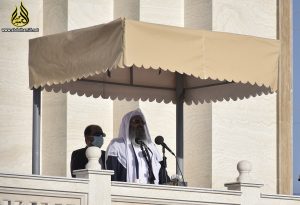 Referring to president Rouhani’s failure in providing Sunnis’ due rights, Shaikh Abdol-Hamid insisted that during Rouhani’s presidency, not only the Sunnis have been deprived from participating in state’s cabinets, but the Sunni advisor to the president has been removed too.
The most influential Iranian Sunni leader was talking to tens of thousands worshippers before the Eid al-Adha prayers in Zahedan on July 31, 2020.

He said that president Rouhani’s administration has not yet been able to satisfy the Sunni community in Iran while he has been president of Iran by Sunnis’ vote.

The Iranian Sunnis leader strongly complained of Rouhani’s administration believing that president Rouhani has failed to fulfill his promises of realizing Sunnis’ due rights during his presidency.

“More than forty years have passed since the establishment of the Islamic Republic of Iran in the country; during this time, Sunni community, the second largest population in the country which has been present in all national fields and defended country’s territorial integrity, was deprived of its certain rights.”

He added: “Sunni elites have been making efforts to be employed in government positions through debates and negotiations since the beginning of the revolution. However, the constitution legislated a rule that president must be from the official sect of the country and a Sunni cannot be president (which is an unacceptable clause), but nowhere in the constitution is written that the Sunnis cannot be appointed as a minister, deputy minister, vice president, provincial governor and so on”.

“If we accept that a Sunni cannot be president of Iran, so why the Sunnis have been deprived of other positions?” Shaikh Abdol-Hamid further questioned.

President of Darululoom Zahedan added: “The President and the minister of Foreign Affairs have appointed one or two Sunni ambassadors, but not more. Unfortunately Iranian Sunnis cannot achieve government posts freely and if someone can do so, after a while s/he is dismissed. Since the Islamic revolution, a Sunni has not been appointed as a provincial governor”.

Shaikh-ul-Islam Mawlana Abdol-Hamid continued: “Sunnis in Iran are complaining that despite appearing in all scenes and fields, they have not been achieved their due constitutional rights yet. They also complain president Rouhani for his failure on realizing Sunnis’ civil rights.”

“Unfortunately president Rouhani has been failing in addressing Sunnis obvious rights”, he said.

Shaikh Abdol-Hamid demanded that Sunnis should serve the country as ministers and governors. “They should be employed in government jobs on local and national levels”, he said.

President of Darululoom Zahedan said that it would be a great honor and dignity for the country’s leaders and clerics if they appoint Sunnis as ministers.

Shaikh Abdol-Hamid believed that there should be no difference between ethnic and religious communities and tendencies in distribution of posts and all Iranians should be treated equally.

“We thought that the Supreme Leader’s order would be the final order to the authorities to be carried out, but unfortunately we do not know why this decree was not implemented in the country and its effect has not been seen”, Shaikh Abdol-Hamid expressed his concerns.
“We did not know where the letter of the Supreme Leader went and who read it and who did not read it?!” he further stated.

Shaikh Abdol-Hamid addressed the president during Eid al-Adha sermons and said: “President Rouhani! We still don’t know what is the source of the problem with Iranian Sunni brothers and sisters? Is there a different and particular policy for Sunnis? Where these policies are made, in Qom, Mashhad or Tehran? This is a mystery that where is the problem with Sunnis.”

Shaikh Abdol-Hamid urged that Sunnis who have fought to defend their country and were killed in this way, should not be deprived of their due rights.

“They must be engaged in high positions to serve the country as their Shiite countrymen,” he believed.

“We ask president Rouhani, If there is an obstacle, you should make it clear, otherwise the criticism still remains on you and on your administration”, the outstanding Sunnis leader in Iran urged.

Iranian Sunnis seek honor, not power
Shaikh Abdol-Hamid further pointed out: “During forty years of the Islamic Republic of Iran and during the two terms of the presidency of president Rouhani, there have not been changes in the distribution of services, yet. In Sistan-Baluchestan, some mega projects are underway such as gas pipelines and railways, and if there is a shortage, it’s in other parts of the country, too; but the main demand of the Sunni community is to maintain dignity”.

He stated: “The Sunni community does not seek power, but it wants honor, dignity and services for the country. What we say is to involve us in running the state’s affairs in order to preserve our dignity”.

“We respect the territorial integrity of our country and seek fraternity and brotherhood”, Imam of the Grand Makki Mosque of Zahedan said more.

“Our way is the way of the Holy Qur’an, which is the way of brotherhood. We will not allow division, violence and extremism to spread in our beloved country. We don’t pursue division; we follow logic and peaceful political ways. We hope that the government and Mr. Rouhani who were elected through our votes will make changes in policies and attitudes”.

At the end of his speech, Shaikh-ul-Islam said in the biggest gathering of Sunnis for Eid in Iran: “Now the country is under attacks from outside that requires us to be united in inside”.

“If the president appoints Sunnis in his cabinet, the country will be honored and respected more around the world”, Shaikh Abdol-Hamid believed.