Shaikh Ab. Hamid alluded to the interception in live coverage of his speech:

Director of Provincial TV must Have Apologized to People 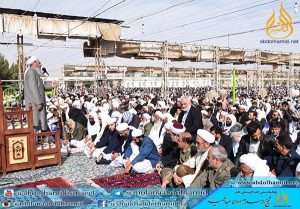 Shaikh-ul-Islam Mawlana Abdol-Hamid pointed to the mass protests and objections of the people against the state-run provincial channel of the IRIB for interruption of his speech during a meeting with the president Rouhani and said that the director of the channel was supposed to apologize to the people.

Shaikh Abdol-Hamid expressed his concern about the interruption of his speech by the IRIB in Friday sermon of January 24, 2020 saying: “The incident that took place at the Crisis Management Task Force meeting in Chabahar caused a great concern to the people especially to the young.

In this regard the Friday Imam of Sunnis in Zahedan said: “I didn’t speak against anyone in the meeting, but I spoke about flood damages and possible ways to restore their routine life, such as taking preventive actions, paying attention to the infrastructures, building roads, bridges, and levees around villages.”

Mawlana Abdol-Hamid explains the issue by saying: “I considered all aspects and thanked those who helped flood stricken people. My speech was against no one. The act of the state TV was not in favor of unity.”

Pointing out to the consequences of the discontinuation of his live broadcast in the state-run TV channel, Mawlana Abdol-Hamid said: “It caused widespread concern to the people of the province and concerned the flood-affected people who needed to be annoyed, were worried.”

The Iranian Sunnis’ leader said that although there were no excuses for interrupting his live broadcast, the provincial channel’s director had to apologize not to me, but to the people. It would be a wise choice and would reduce people’s concern. Apologizing is a power and capability.

Shaikh Abdol-Hamid said: “I didn’t think that people would be so worried over the provincial channel’s action; however now I’d like to advise the young to not continue their protests because their voices have reached to the authorities.”

The most influential Iranian Sunni leader went on to emphasize on the necessity of “lasting unity” and said that the most important thing that we are looking for a “durable unity”.

“We consider Shiite and Sunnis as brothers but unfortunately some do not think so”, he added.

“It is a fact that the majority of the province’s population is Sunni, so we expect the authorities to pay more attention to the Sunni community”, Mawlana Abdol-Hamid said.

“The IRIB does not belong to a particular group, community or religion, it belongs to all. All Iranians including parties, tribes and religious sects have an equal right in the state TV and radio whose expenses are on the shoulders of all of them”, the president of Darululoom Zahedan said.

Shaikh-ul-Islam criticized the Islamic Republican of Iran Broadcasting and said: “People don’t like the broadcasting and ongoing coverage of Sunnis Friday ceremonies and broadcasting scholars’ speeches as they broadcast old pictures showing a little crowd.”

Mawlana Abdol-Hamid chastised the provincial state TV’s attention to the Balochi language, saying that Balochi programs were so low which are not acceptable for the Baloch community at all. All languages and cultures should be respected. The provincial TV and radio should focus more on Balochi language”, he urged.

He gave an example of discriminatory acts against the majority Sunnis in Sistan & Baluchistan and said that Adan of Sunnis has not been broadcast in the TV and radio while according to the constitutional law, the religious laws in Sunni majority provinces must be implemented according to their jurisprudence.

“This is the law that has been forgotten”, he said.

“Unfortunately, some follow and implement the laws which are in their favor, otherwise they reject to follow the law, while the law should be followed everywhere”, Mawlana Abdol-Hamid said.

Mawlana Abdol-Hamid continued his speech saying that it was a fact that if the rights of the Sunni community were fully respected, Iran’s popularity would have grown worldwide today more.

He said Shiites and Sunnis are equal and have equal rights.

To prevent religious conflicts, the Imam of the Grand Makki Mosque said: “No one should incite Shiites and Sunnis against each other”.

Finally, Mawlana Abdol-Hamid thanked the Iranian people for their continuous aids for the flood-hit areas of south Baluchistan and encouraged for more cash assistance and more attention to the affected people.