A Muslim should be Honest in his Words, Deeds 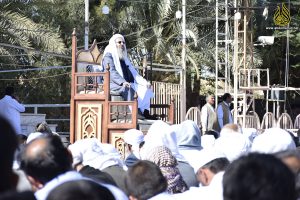 Mawlana Abdol-Hamid encouraged Muslims to the most inspiring deeds in a part of Friday sermon of November 29, 2019 in Zahedan, Iran and urged that a Muslim should be honest in his words and deeds with taking serious steps towards Allah.

Friday prayer Imam of Sunnis in Zahedan inspired Muslims to correct their actions and reform their deeds and beliefs. He said: “Muslims should always have a close relationship with Allah the Almighty.”

Shaikh-ul-Islam Mawlana Abdol-Hamid said that the Holy Prophet Muhammad, peace be upon him, says: “Allah does not look at your appearance; rather He looks at your heart and actions”.

“Allah the Almighty looks at servants’ hearts to see how sincere and faithful they are with Him,” he added more.

Mawlana Abdol-Hamid described the message of a Holy Prophet’s hadith and said: “Allah observes our deeds whether they are good or bad or if they are for the sake of Allah or not.”

“Allah the Almighty observes how much we spend money in His way and help poor and needy people, build mosques for Him and pray to Him.” he said.

“A Muslim’s heart should be clean and free from the pollution of sin; Muslims should not hide jealous, hatred and hostility in his heart against his brother”, the president of Darululoom Zahedan said.

He urged: “Muslims should avoid arrogance because Allah does not accept worships of arrogant individuals. Allah the Almighty says: “فانها لاتعمی الابصار ولکن تعمی القلوب التی فی الصدور;
Truly it is not their eyes that are blind, but their hearts which are in their breasts”.”

Mawlana Abdol-Hamid said: “Property and beauty of a person that he is proud of them have no worth before the Lord; his good deeds are the things which benefit him.”

“Purify your soul and body by reciting the Holy Qur’an and clean your heart with the remembrance of Allah and death and prepare for the Day of Judgment when all secrets will be disclosed”, the Imam of Grand Makki mosque said.

He concluded his points and said: “To rescue from divine punishment, reform your deeds, strengthen your faith, change your behavior and treat others well.”

Shaikh-ul-Islam Mawlana Abdol-Hamid expressed his concerns about the increasing number of road accidents and called on drivers to respect traffic laws and regulations for their safety and safety of their passengers.