Shaikh said in his class of the Qur'an:

Silence on Uighur Muslims, a “Crime” 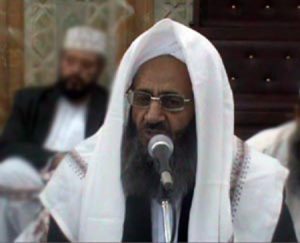 Shaikh Abdol-Hamid denounced Chinses government’s oppression and discrimination against the Uighur Muslim minority and called Muslim countries’ silence on this issue “a crime”.

Talking to the audience of his Tafseer class in the Grand Makki Masjid of Zahedan on July 7, 2019, the most influential Iranian Sunni leader said: “According to the reports, the government of China separates Muslim children from their families and then brainwashes them in especial schools with non-Islamic standards.”

“Unfortunately, the Muslim countries, due to their good relations with China, have been mute on these steps and it is a crime,” Mawlana Abdol-Hamid underlined.

He clearly said: “If the Muslim states show inability and incapacitation in this issue and avoid from cutting ties with China in protest to this cruelty and discrimination, they will be considered “guilty”. Human rights organizations and all international organizations and countries which proclaim defense of human rights should protest against these cruel and barbaric policies of China.”

The most outstanding Iranian Sunni leader termed Chinese statesmen “narrow-minded” and said: “China has developed in industry, technology and material fields, but its leaders and statesmen are still narrow-minded culturally and intellectually.”

“The whole world has reached to this point unanimously that there should freedom of speech and thought, but religious restrictions, narrow-mindness and pressure are still continued in China. They torture Muslims and forbid them from offering prayers, teaching Qur’an and observing fast. Their behavior with the Muslim minority is cruel and oppressive,” he further said.

Shaikh Abdol-Hamid warned the Chinese government and said: “If the government of China continues its crime against Muslims, they will face Allah’s divine punishment.”

“The leaders of Russia, after one century of tyranny, suppression and oppression, finally knew that Muslims and all other religions should be free. It is strange that Chinese leaders still suffer from narrow-mindness in their policies and strategies,” he concluded his points in the class of exegesis of the Noble Qur’an.