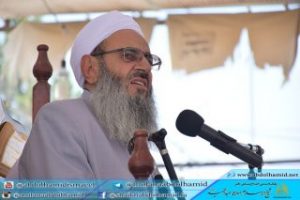 Shaikh Abdol-Hamid has criticized pertinent departments over creating troubles and limitations for mosques and religious schools of the Sunni community in Iran. He termed such acts “against the constitution and unity”.

Khateeb of Sunnis said in a part of his Friday sermon of Oct. 19, 2018: “All directors and officials should behave justly with people and avoid from ethnic and sectarian steps. They should not discriminate among ethnic and religious communities.”

“We are shocked and ashamed to hear about such behaviors and incidents. Stopping any seminary/Madrassah or interfering in internal issues of any mosque are against unity; they do not make people closer to each other,” Shaikh Abdol-Hamid said.

He termed such acts “childish” and said: “Unfortunately, some people who consider themselves “officials” show childish behaviors. Creating limitation and troubles for education and religious issues is an illegal act and contrary to the constitution.

Mawlana Abdol-Hamid further said: “Sectarian and ethnic steps damage the country and society. Masses have been suffering from different kinds of problems due to economic sanctions; in such conditions pressurizing people religiously is extremely against discretion and wisdom.”

“Directors and managers should act on the path of justice; masses are like children of one father and the state should implement justice among all of them. Equal and just eyes can guarantee peace and calmness in any society,” he urged.

The eminent Islamic scholar said: “There are sectarian directors in the country and in our province (Sistan-Balochistan) who marginalize other communities. They are weak directors who do not see all denominations and communities.”

In a part of his speech, Shaikh Abdol-Hamid reacted to the incident of kidnapping border guards in the last week and counted it “shocking” and “bitter”.

He said: “Maintaining peace, especially security of borders, is very necessary. Problems and demands should be pursued and followed up by negotiation and peaceful channels.”

In another part of his Friday speech, Shaikh Abdol-Hamid congratulated the Health Insurance Week and said: “Islamic Republic of Iran has been providing good services in the field of health. It stands on a much better position comparing to many other countries in this regard.”