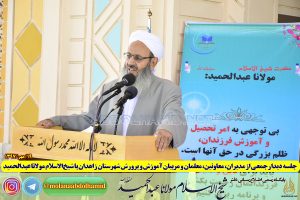 Meeting a group of teachers and directors of the education office in Zahedan, Shaikh Abdol-Hamid termed “material and cultural poverty” the most obvious fruits of “discrimination” in any society.

Website of the office of Shaikh Abdol-Hamid, the most influential Iranian Sunni scholar, reported some parts of his speech in the meeting with male and female teachers of Zahedan where he said: “Unfortunately our region has been suffering from educational falloff and cultural deprivation. This terrible condition hurts us. There are regions without any educated person holding BA, MA or Ph.D. degrees. It is due to the fact that there has not any effort to educate people while they have talented children.”

He further said: “Everyone agrees that Sistan-Baluchistan is the most deprived province; here people suffer from poverty, unemployment and lack of education.”

“All brothers and sisters should decide firmly to change this situation. It is a divine tradition that when a nation decides to carry out a change, He supports them,” Shaikh Abdol-Hamid underlined.

President of Darululoom Zahedan refused some strategies of the education ministry and urged on “accurate planning”.

He said: “The office of education should take benefit of locals’ talents who are the best managers and we have seen the fruit of such employments. They know the region better and they can be a tool for reputation of the government.”

“It is one of the responsibilities of the education office to pave the way for learning religious rulings for students of different sects,” Mawlana Abdol-Hamid emphasized.

Change policies
In another part of his speech, Khateeb of Sunnis urged on the revising the current polices of the education bureau and said: “It is a wrong policy to prefer any particular ethnic or religious community in the ministry of education and its offices. We all belong to this country and all should have share in its development.”

“No nation can meet advancement without education and knowledge. The immortal nations enjoyed education, science, faith and honesty. There should be a peaceful competition between us and other nations,” he added more.

At the end of his speech in the meeting of teachers and educational directors, Shaikh Abdol-Hamid said: “We should protect our culture, language and ethnic and religious identity. A nation that denies giving importance to such things will be merged in other nations and it is very bad.”

“We should resist with educational falloff and dropout tendency of the region. We should strongly bring people to the field of education and encourage them,” he concluded his points.