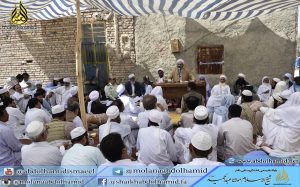 In a trip to Sarbaz, Shaikh Abdol-Hamid took part in a reconciliation meeting held in Espeytaki village of Sarkawr. He had travelled five times before to put an end to this long dispute which had left two men died.

Talking to the participants, he said: “Dispute is very bad. Good people regret after creating any dispute. These reconciliations are experiences for you to not fight again. Some experiences are obtained after paying an expensive price.”

He termed “egoism, selfishness and intolerance” the reasons behind disputes and fighting.

The most influential Iranian Sunni scholar said: “Killing an innocent person is equal to killing whole humanity. Forbearance has been one of the good traditions in the region. Taking revenge is not manhood and generosity; it is in forbearance.”