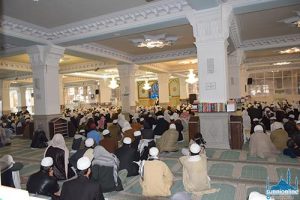 Late Maulana Saleemullah Khan, the chairman of Wifaq ul-Madaris Pakistan and founder-rector of Jamia Farouqia Karachi passed away on Sunday this week. He has thousands of students around the world. Many of Sunni Ulama in Iran studied famous books with him in Karachi.

Heading a delegation of Ittihad-e-Tanzimaat Madaris Diniyah Pakistan, the confederation of Islamic Seminaries in Pakistan of five schools of thought, about ten years ago he travelled to Iran where he visited Darululoom Zahedan. Darululoom Zahedan is the biggest Islamic seminary of the Iranian Sunni community in Iran.

Reminding some parts of his biography, Shaikh Qasemi said: “Ml. Saleemullah Khan was proud of Shaikh-ul-Islam Maulana S. Hussein Ahmad Madani. Ml. Madani was a great resistor, brave and pious scholar. According to Ml. Abul-Hassan Nadawi, acting upon the highest degree of the religion (azeemat) and being responsible (hamiyat) distinguished him from other scholars.”

“These imitable features could be seen among the students of Ml. Madani, too. Shaikh Saleemullah Khan was copy of his mentor, Ml. Hussein Ahmad Madani,” he added more.

The chief editor of Neday-e-Islam magazine said: “Ml. Saleemullah Khan was respectful and acceptable for all groups and sects. His sobriety, purity, purification and humbleness compelled others to accept his position. Allah had bestowed him a great ripeness and genius.”

“Sh. Saleemullah Khan was in contact with the people of his society. Most of the parts of the world have not been deprived of his direct or indirect students’ knowledge and services. His entire life was devoted for Islam; even he was not taking lunch at all to take the advantage of his precious time, more. He used to advise Ulama to educate their children making them scholars. His life is exemplary for scholars and Ulama,” Ml. Qasemi underlined.

Ml. Abdol-Hamid: Demise of Sh. Saleemullah Khan is an unamendable loss
At the end of the condolence reference, Shaikh Abdol-Hamid, the rector of Darululoom Zahedan talked to the scholars and students of seminaries in Zahedan.

He said: “When I was studying in Pakistan, there were four prominent and outstanding scholars in Karachi; Ml. Mufti Mohammad Shafee’ Osmani, Ml. Yousuf Banuri, Ml. Rasheed Ahmad Ludhianvi and Ml. Saleemullah Khan, may Allah have mercy on all of them. They were so famous and popular in Pakistan, especially in Karachi.”

“Ml. Saleemullah Khan was a great pious man and outstanding researcher. His endeavor was imitable as he was watching and controlling thousands of seminaries in Pakistan even on wheelchair,” he pointed out.

Admiring the scholars of Deoband, the Hadith teacher of Darululoom Zahedan said: “Ulama-e-Deoband have not got this great position only by teaching, studying and worshipping, rather they reached to the peak of perfection by resisting against colonialist British government and all crises.”

“Ulama of Deoband cancelled out the conspiracy of the British colonialist to uproot Islamic Shari’ah. The role of these scholars is imitable for all in any society. By showing patience and preferring the interests of Islam on personal interests, people reach to the Almighty. Worshipping Allah and acting upon Sunnah is the condition,” the rector of Darululoom Zahedan and chairman of the Coordination Council of the Sunni Seminaries in Sistan-Baluchistan said.

Ml. Abdol-Hamid expressed his deep sorrow on the demise of Ml. Abdol-Hafeez Makki, calling him “Zakir, Aabid and bound with Shari’ah”.
He concluded the meeting with making Du’a for the late scholars, their full forgiveness and patience of their families and students.